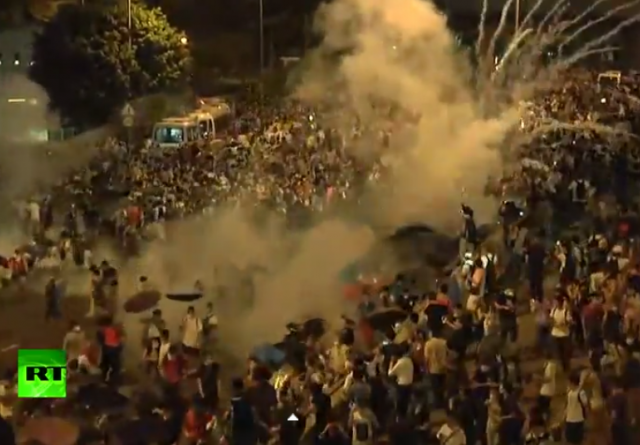 My stepdaughter, a graduate of UCLA with a degree in Chinese, works in Beijing.

Today, she has been regularly protesting updates via Facebook on the pro-democracy protests in Hong Kong, and confirms that tear gas is being used to disperse the massive crowds.

Tens of thousands of pro-democracy demonstrators are surging through the streets of Hong Kong to protest against Beijing’s influence over how the semi-autonomous territory elects its top officials.

Police used several rounds of tear gas to scatter the mostly peaceful crowds that had blocked one of Hong Kong’s main thoroughfares in the early evening. But protestors did not disperse entirely.

Earlier today, pro-democracy group Occupy Central announced the beginning of a civil disobedience campaign intended to disrupt Asia’s largest financial center until its demands for free elections are met. The campaign, originally planned for October, is riding a wave of momentum following a sit-in over the weekend where televised clashes between police and students, some of whom were pepper sprayed, prompted city residents to rally in support of the students. Organizers say that around 60,000 demonstrators were on the streets today, media reports put that number at 30,000, and police have not given an estimate.

In the afternoon, Hong Kong officials flatly refused Occupy Central’s demands—the reversal of a decision from Beijing last month that would give China vetting power over Hong Kong’s elections and the resumption of consultations on political reform in Hong Kong. At a press conference, Hong Kong’s chief executive Leung Chun-ying dubbed the assembly “an illegal act.” The Hong Kong government also released a statement stressing that its decision to implement universal suffrage in 2017 is “legally binding.” The government has “all along been listening attentively to the members of public and are committed to maintaining a diversified society,” it said.

A CNN video summarizes the situation:

Another video from RT gives you a sense of the magnitude and nature of these protests against the Chinese and their attempts to thwart the will of the people of Hong Kong:

The protests are continuing, despite nearly three dozen people being injured in the response.

At least 34 people were injured and hospitalized, the Hong Kong Information Services Department said Sunday. A spokesman gave no details on the extent of the injuries. The department earlier said six police officers were injured, but it was unclear if they were included in the 34 figure.

Several of the young people occupying the business district told CNN they were going to stay overnight.

Protesters have been using umbrellas and face masks to defend themselves from that gas. The demonstrations have been organized by Hong Kong student groups, and over 100 people have been arrested.

The student organisers behind the protest, the Hong Kong Federation of Students, have appealed for students to retreat due to fears that police could use rubber bullets to disperse the crowd.

A co-organiser of Occupy Central, Chan Kin-man, says he supports the students’ decision.

Police said they had arrested 78 people on Sunday on charges of “forcible entry into government premises, unlawful assembly, disorderly conduct in public place, assaulting public officers and obstructing police officers in due execution of duties”.

It comes after the arrest of more than 70 people in Saturday’s protests, including prominent student activist leader Joshua Wong, who has since been released.

Hong Kong, a key international fiscal center that has the world’s 6th largest GDP, was handed over to the People’s Republic of China by the United Kingdom in 1997. Its citizens have long enjoyed a sense of autonomy and prosperity.

As we have noted in earlier reports, China has been flexing its military muscle in the region. That one of its few wealth-producing areas is engaged in large-scale civil disobedience may spell big trouble for China.

Here’s a reminder of how the 1989 pro-democracy protests were handled.

Too much activity like this scares away foreign investors who seem to be happy with the status quo .

“Police used several rounds of tear gas to scatter the mostly peaceful crowds” what the hell is that supposed to mean?

Everyone wants their own IPO.

The controversial Moral and National Education Project went active for HK schoolchildren in September 2012 and for secondary in September 2013. Two years out for little kids and one year for the students who can describe the change. It ties into a mandatory Universal Love Principle that essentially mandates collectivism and says so. http://www.invisibleserfscollar.com/using-education-to-shut-down-free-choices-and-then-redefining-as-personal-autonomy-orwell-lives/

Did not mean to finish like that. What is going on in Hong Kong is comparable to what is going on in other countries that ever existed under UK common law or its offshoots, including the US. We are varying though in the rate of the change and our ability to perceive the nature of the shift.

Hong Kong is both watching because of wariness of mainland China and its totalitarian past and education was teed up first. At global conferences, the HK government touts that this is the first group to go all the way through K-12 under this new troubling vision. I can see a great many HK residents looking at their children, relatives, and friends and accurately recognizing they now deliberately know little and believe a great deal. At the deep level of emotion and much of it false.

They are idiots. They are pretending the Commie government in Beijing actually cares about public image. What’s going to happen here is the Commies are going to crush this chaos in the streets and then they are going to revoke everything that made Hong Kong special. The fools in the streets have no idea how much better they have it than their brothers on the mainland. They are about to find out.