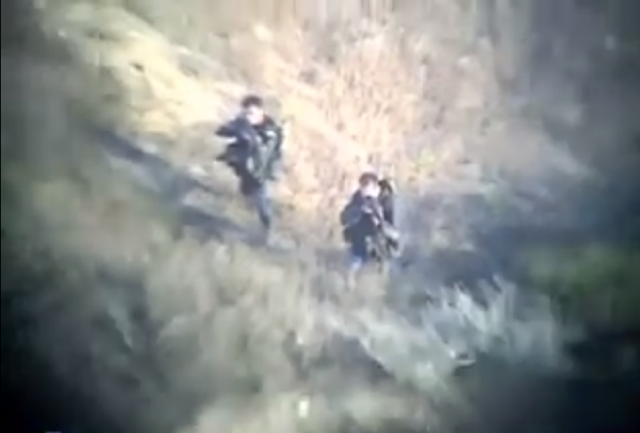 Rockets fired from Gaza were shot down today over several major Israeli cities, including Tel Aviv — and landed in the Jerusalem vicinity.

Hamas landed 5 “naval commandos” by sea. They were taken out by an IDF helicopter gunship.

(added) Another video from the Israeli Navy of the same incident:

Elsewhere, Palestinians at the al-Aqsa Mosque in Jerusalem cheered the rockets landing in Israel (via Truth Revolt):

Believe in miracles? Here’s one: Rocket from Gaza explodes next to Ashdod event hall hosting multiple weddings. No casualties. (Channel 2)

Yet another miracle: Rocket fired from Gaza smashes into yard outside Tel Aviv-area house, fails to explode. (Ynet) pic.twitter.com/sOjwyXeXfa

Hamas encourages civilians, including children, to act as human shields. The picture was taken from Hamas TV… http://t.co/eWiDypUEIO

…with free sides of “Obama Botulism!”

Outstanding! Get ya a case of beer for that one!

It is now officially safe to surf that beach.

They’re firing rockets at Jerusalem? Well, with any luck one will land directly on top of “Al Aqsa Mosque”

IDF could use a little Paliwood magic to make that happen if’n they was clever.

Unfortunately, I doubt any Hamas rocket or small combination of rockets could do significant damage to the mosque. A black eye, maybe, but no kill shot.

This website emphasizes that its participants are not hateful. Please tone down the ghoulish comments. Cooler heads need to prevail.

Yes, the Israeli and Hamas fighters have always looked to the comment sections of American blogs in order to properly gauge their respective levels of anger and the violence to which it leads.

While there aren’t people I hate, there are things I hate that people do.

And I can kill someone grave-yard dead without the least hatred for them in my heart.

There are people out there who use hate as an essential part of their decision-making process. They will deny that you can do that, and they’ll secretly be jealous that they cannot do it. Therefore, they are extremely dangerous.

I agree, let’s encourage Israel to treat them like we treat our own illegal aliens, eh? I’m sure that many Israeli Muslims are whining even as we discuss this aggressive eradication of illegal aliens. (sigh)

You don’t need to worry though – He who watches over Israel neither slumbers nor sleeps, and He always prevails. The Muslim cause was doomed from it’s earliest inception. The problem is not with their murderous hate, but rather from their stiff-necked unteachable worldview. I guess that’s what happens when a person gives away their birthright to satisfy their own lusts, eh? Welcome to Islam.

May cooler heads prevail, the trouble resolved by comity? How about Israel prevails?

Perhaps Professor Jacobson would care to give his opinion on this?

I once saw films of American soldiers machine-gunning Nazi concentration camp guards. I felt no grief at the deaths of those beasts, only “they died too quickly.”

Are you Professor Jacobson, or do you think he is incapable of speaking for himself?

Why do you foolishly think I speak for him? I speak for myself. I merely challenge your mushy sympathy for savages.

I’m not Professor Jacobson. Neither are you. Who the hell do you think you are to be dictating who can post in response to your comments?

I shed no tears when islamo-fascist savages die. On the contrary: I hope for their extinction.

Why do cooler heads need to prevail? What’s wrong with hate? The Bible says there’s a time for hate, and if that’s not now then when is it? Every Arab who cheers the rockets joins himself to that crime and declares himself our enemy, and the enemy of all humanity, who should be killed like a rabid dog.

Buzzsawmonkey’s father worked on the Manhattan Project. When asked later whether he had any regrets, he said yes, he regretted that they didn’t get it done in time to drop an atom bomb on Germany.

When I said that “cooler heads need to prevail”, I meant here, in the commenting. The IDF taking out a team of terrorists is one thing. For us to gloat over it like ghoulish voyeurs is quite another.

This website dedicated to legal insurrection against a tyrannical, criminal Obama administration. It’s going to be hard enough to do that without making comments that prove liberals’ accusations that Tea Partiers are kill-crazy Neanderthals.

Again, perhaps Professor Jacobson would like to give his opinion on this.

Second…these comments prove no such nonsense. Most of us have served in our armed services. We were quite prepared to kill to defend, and we took some measure of pride in being able to do it very well. We like seeing our allies likewise prepared and expert in that vital activity.

“The IDF taking out a team of terrorists is one thing. For us to gloat over it like ghoulish voyeurs is quite another.”

This is mild compared to other frequent ghoulish voyeurisms by commenters here. Perhaps this site is too intense for you, princess.

“This website dedicated to legal insurrection against a tyrannical, criminal Obama administration.”

Yes, just like the Israeli and Hamas fighters, the anti-Obama political forces always look to blog comments for definitions and direction. Actually, we give people more credit than do you. Only someone looking for trouble would equate these posts with ‘ghoulish voyeurism’ or take them as confirmation that TP-ers are literally murderers. Hyperbole much? Yikes.

Careful, HH. You’ll end up on some government list somewhere.

Is that a whiff of HH pride I smell? I sure hope so.

May G-d and the IDF protect the people of Israel.

We note that Hamas praised the killers of the 3 kidnapped Israeli teens. We note also that all aspects of Israeli society condemned the kidnapping and killing of a Palestinian teen.

Millions of America’s Christians stand with and pray for the people of Israel.

My friends, we should not exult over the deaths of Israel’s enemies. How would God want us to behave? Should we not want to do that?

Why on earth not? The Bible is full of exhortations that such exultation is exactly what God wants. “When the wicked are lost, there is song.” “The righteous man shall rejoice when he sees revenge, and wash his feet in the wicked man’s blood.”

I dunno about God but I would shoot & take my chances . Let these guys confront their God first .

The gunship guys were just helping them redeem their “virgins coupon”.

You ever read Joshua or Judges there Pal? Old Testament G-d was never shy about his people doing violence unto other’s in His name.

There are definitely miracles happening as we speak in Israel.

May G-d direct the forces of good to prevail over the evil that is being inflicted on His chosen.

Seeing that the Peace Conference, sponsored by Haaretz, is protested by the it is interesting to read read some comments about said Conference.
Why the Palestinians would protest the following
http://www.commentarymagazine.com/2014/07/07/haaretz-portrays-judaism-as-the-obstacle-to-peace/
makes me wonder what they would not protest.

And according to The Times of Israel Naftali Bennett, Economy Minister, was given a tough time.
http://www.timesofisrael.com/naftali-bennett-reportedly-assaulted-at-peace-confab/
See, just like pro-Israel groups on campus

” Haaretz said in response to the incident that “it was very unfortunate that Minister Naftali Bennett, who was invited to speak at the Israel Conference for Peace, took advantage of the inappropriate behavior of one of the attendees who pushed him lightly and claimed that he’d been punched to make headlines and trick the media.” ”

Poor Haaretz in its attempts to “trick the public” feels upset when the boot is on the other foot?

Haaretz should be grateful that boot isn’t planted in its posterior or standing on its neck. Just saying.

A daylight water insertion onto a stretch of beach offering little meaningful cover. They looked the part, I guess, but they might as well have been wearing neon pink wetgear and sending up flares. Hamas should be demanding a full refund from their Revolutionary Guard “advisors” for that one.

It sucks being a lead magnet.

Watching those Israeli gunships vaporize those terrorists: who doesn’t love a movie with a happy ending?

I suspect that these five either owed somebody money and refused to pay or were getting a little too close to somebody’s girlfriend (or sheep herd). Going in with this type of exposure and visibility smacks of being set-up.