Monarchy in America – The Centralization of Power in the Executive Branch

Monarchy in America – The Centralization of Power in the Executive Branch

“America is dropping like a stone in rankings of freedom.” 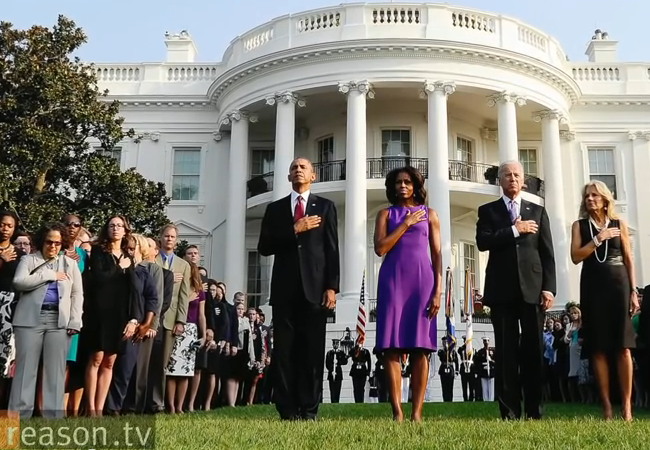 Tracy Oppenheimer of Reason TV recently interviewed Frank Buckley, an author and law professor at George Mason University. Buckley contends that the power of the presidency has strayed from what the framers intended:

Presidential Power and the Rise of American Monarchy: Q&A with Author Frank Buckley

“America is dropping like a stone in rankings of freedom. As power accumulates in one person, expect that to continue,” says Frank Buckley, George Mason University law professor and author of the new book, The Once and Future King: The Rise of Crown Government in America.

Buckley sat down with Reason TV’s Tracy Oppenheimer to discuss how the U.S. presidency has evolved into what he calls “something like an elective monarch.” He says that this is not what the framers of the Constitution had intended, nor did they conceive of the modern version of the separation of powers.

“A parliamentary regime was more or less what the framers wanted…as far as the separation of powers is concerned,” says Buckley “instead of a device to constrain a president, it’s one which immunizes him from criticism by Congress.”

With all that in mind, John Daniel Davidson of The Federalist has a recommendation for you and your family this holiday weekend.

Read the Declaration of Independence:

Suppose you and your family decide to celebrate the Fourth according to the old custom this year, and at some point between the burgers and fireworks you gather everyone together and read the Declaration of Independence out loud. Once you get past the familiar opening—“When in the course of human events,” etc.—you’ll get into the list of grievances against King George III, “a history of repeated injuries and usurpations, all having in direct object the establishment of an absolute Tyranny over these States.”

Most of us are less familiar with this section, but the list follows a standard rhetorical structure: it begins with the least severe crimes and gradually ramps up to the worst.

About two-thirds of the way down, you’ll notice a few injuries and usurpations that have a certain resonance today, like “imposing Taxes on us without our Consent”—think Obamacare’s individual mandate penalty, which was only construed as a “tax” by the Supreme Court after the fact. The accusation that King George “erected a multitude of New Offices, and sent hither swarms of Officers to harrass our people” should call to mind the deliberate targeting and harassment of conservative groups by the IRS, possible evidence of which was apparently “lost” when former IRS official Lois Lerner’s computer crashed.

Maybe I’d need to read a lot more of Prof. Buckley’s ideas and support, but…

the notion that the Framers wanted and expected a parliamentary form of government seems a bit loopy, and counter-factual from a historic POV.

There was always supposed to be an “executive” branch, and not just a “prime” minister who was first among equals in the legislature. That’s why they used the term “president”.

“A parliamentary regime was more or less what the framers wanted”

But they were certainly capable of setting up such a government if that was what they had wanted. They didn’t.

They certainly had excellent examples from recent English history, ranging from Lord North during the Revolution (a rather sensible man who unfortunately never saw it his place to talk sense to George), to William Pitt (the Elder, later Lord Chatham, the man who more than any other made Britain into the empire known to the colonials).

They wanted Congress to be a deliberate debating society, but realized that such a group would be useless when it finally came time to turn words into action. So they established an executive which would have relatively little to do with laws or policies. Unlike a Parliamentary executive (the Prime Minister), the Constitutional executive would not be part of the legislature. The intended separation of functions as well as powers is clear. But the executive was intended to be just that, and not a leader or “head of state”. They didn’t want a king or a fuhrer, not even an elected one.

Unfortunately, Congress has always been a disappointment, as had its predecessor, the Continental Congress. This has left something of a power vacuum at the head of the Federal government, allowing Presidents of relatively strong personality – think Washington, Madison, Jackson, Polk, Lincoln, Teddy, Wilson – to assert more control than given to them by the Constitution. We have been fortunate that most of these Presidents were both capable administrators and fine Americans (well, maybe not Wilson). But there have been some close calls, such as the disputed 1800 election, when there was a serious danger that Aaron Burr would be the third President.

the U.S. presidency has evolved into what he calls “something like an elective monarch.”

The “Imperial Presidency” has been postulated before. And you could certainly argue that many voters more or less want a king, even if they wouldn’t put it in exactly those words. But that’s not the fault of either the Founders or Congress. And some dreamers even want a tyrant, like those of antiquity; one man who can wave an arm and solve all our problems by executive fiat.

The Executive Branch(es), i.e., HHS, are funded by Congressional appropriations. Defund the beast. Remove the discretionary powers including borrowing and spending that is written into their ‘powers’.

Page 86 of the PDF – G. Revenue and Financing Sources
http://www.hhs.gov/afr/2013-hhs-agency-financial-report.pdf

Give the Executive Branches a Common Core mandate requiring them to ask Congress before it spends/borrows/does anything.