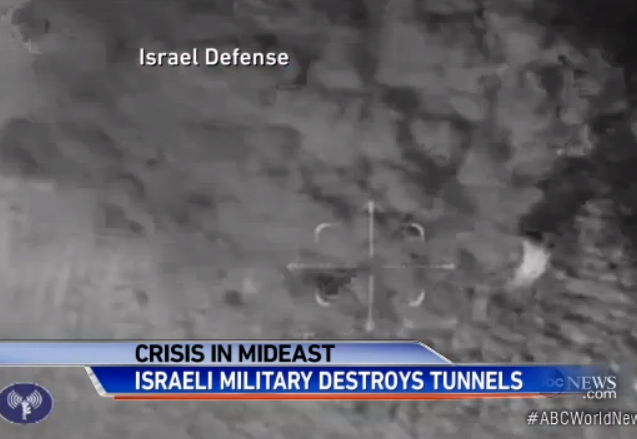 The IDF’s ground incursion into Gaza has led to a rapid rise in the number of terrorists killed. Since the beginning of the ground operation, IDF soldiers have eliminated more than 130 terrorists, including more than 60 Saturday overnight.

Large infantry forces entered Gaza overnight, as the IDF expanded Operation Protective Edge on Sunday. The IDF Spokesperson’s Unit announced that the ground forces joined the ongoing operations to destroy terror infrastructure in the Gaza Strip, which began with the ground incursion.

After we fired a warning shot at this target, Hamas ordered civilians to form a human shield on the roof. pic.twitter.com/ZCBWmxr4wv

Holy crap: The WaPo has also confirmed that Hamas is using Gaza's largest hospital as a command center – http://t.co/AOAbo812Fl (para 8)

Days ago, we warned civilians in Shuja'iya to evacuate. Hamas ordered them to stay. Hamas put them in the line of fire.

For the first time since Op. Protective Edge started the Iron Dome system goes an entire night without being utilized (Times of Israel)

RT"@Daroff: May the memories of IDF soldiers killed today be a blessing: Sgt. Adar Barsano and Maj. Amotz Greenberg pic.twitter.com/22QgHkxIO4"

Sgt. Adar Barsano and Maj. Amotz Greenberg were killed when terrorist emerging from a tunnel encountered their patrol inside Israel. According to news reports, the encounter prevented a worse terror attack as the infiltrators were armed with weapons and anesthetics, suggesting that they intended to abduct Israelis.

After a “fierce” battle in the Shejaya neighborhood of Gaza, Israel and Hamas agreed to a two hour ceasefire. Well you know what happened next.

An article by Barak Ravid, diplomatic correspondent for Ha’aretz says that Netanyahu has successfully cultivated world leaders for political support for Operation Protective Edge. Ravid is no fan of Netanyahu and takes digs at him whenever he can so the overall article, especially this paragraph was of note:

In the past two weeks the attitude to Netanyahu has turned around. The world’s leaders are showing him empathy and understanding. They know that when he tells them that he went into this operation through lack of choice he is not lying. They saw how he dealt with the internal political pressures, how he delayed action for several days and even accepted the Egyptian cease-fire plan. They are convinced that this is not some trick to provide international legitimacy for a re-occupation of Gaza, but rather his authentic desire to avoid escalation.

To be sure, Ravid warns that the support won’t last forever, but it appears that Netanyahu has been careful in the diplomatic field.

And what happened to those rockets found near a UNRWA school last week?

20 Hamas rockets in UN school in Gaza. UN calls the authorities to pick them up. Which authorities? Hamas! You can't make this stuff up

Mitch Ginsburg of the Times of Israel tells of the challenge of detecting and destroying the terror tunnels that Hamas has built.

Once detected, soldiers from the SAMUR unit, specializing in counter-tunnel operations, lower a robot into the shaft. Major Ido, the commander of the combat engineering special forces school, said in a phone interview several months ago that the robots can send back video to the squad on the ground and have the capacity to map the contours of the tunnel.

Afterward, the army will usually send explosive-detecting dogs from the Oketz unit into the channel. On Thursday, an Oketz soldier was lightly wounded and a dog was killed in the tunnel near Kibbutz Sufa. Ordinarily, if the dog detects explosives a bomb disposal robot can be summoned.

Only then are the troops lowered into the darkness. Some of the recently discovered tunnels have been more than 60-feet-deep and over a mile long. Many have branched out near the border, with multiple exits, so as to enable a more complex attack. The army has discovered at least eight and reportedly as many as 30 offensive tunnels, thus far, and the channels are now, the army says, “under comprehensive investigation. ”

Although using a one ton bomb can be used, that is likely to only cause localized damage. To thoroughly destroy a tunnel requires filling it with explosives. Sources tell Ginsburg that the operation to destroy the tunnels could take two weeks.

The most-trafficked article on http://t.co/15kJ52qflJ today is Charles Krauthammer on moral clarity in Gaza http://t.co/WXenLWZcD2

And how did the Gaza Palestinians react to being granted by the Israelis what no previous ruler, neither Egyptian, nor British, nor Turkish, had ever given them — an independent territory? First, they demolished the greenhouses. Then they elected Hamas. Then, instead of building a state with its attendant political and economic institutions, they spent the better part of a decade turning Gaza into a massive military base, brimming with terror weapons, to make ceaseless war on Israel.

Where are the roads and rail, the industry and infrastructure of the new Palestinian state? Nowhere. Instead, they built mile upon mile of underground tunnels to hide their weapons and, when the going gets tough, their military commanders. They spent millions importing and producing rockets, launchers, mortars, small arms, even drones. They deliberately placed them in schools, hospitals, mosques and private homes to better expose their own civilians. (Just Thursday, the U.N. announced that it found 20 rockets in a Gaza school.) And from which they fire rockets at Jerusalem and Tel Aviv.

Since last night, 13 soldiers from the IDF's Golani Brigade were killed while fighting Hamas terrorists in Gaza.

If the Israelis want to do this right they’ll have to destroy every tunnel in Gaza. That’s a very, very tall order. But they have to prove to Hamas that anything Hamas can build (or dig), Israel can wreck.

So do we. Several, in fact. We just aren’t bright enough to deal with that reality.

Witness Hagel and Kerry, and the Valley Girls at State.

Rags tongue in cheek , we are bright enough it’s our voted in officials that have problems thinking for themselves !
Your my Fav poster Rags . Keep it up .

Golly, my blushes… Thank you!

But truth is, I wouldn’t know how to stop.

Like the brilliant cartoonist, Ramirez, I figure everyone is entitled to my own opinion…

Or maybe they are the enemy.

It’s not likely, The cycle will continue every few year, until Hamas gets rockets they can aim. And then all of our fancy principles will go out the window. Or we will die.

There is some excellent push-back against the NYT propaganda machine.

David this was the Best coverage i have seen on the net . Outstanding TY

In case anyone had ANY doubt…

Kerry is a flucking moron.

In the wide, wonderful world of people fit to be Sec. Of State, when Baracula chooses this idiot what does that tell us about his interest in American survival, much less success?

Pinpoint? The largest number of soldiers were killed by an RPG fired from an apartment. How the hell are we supposed to know who’s in there. And one of them – it’s not even official yet, I found out from the guy who took me home from work – is a kid from my neighborhood. Left a widow and two orphans.

OK, all you scum out there who said there was something immoral about killing the enemy and not losing your own? Are you satisfied now? There’s gonna be another name on the plaque in the center of the synagogue, another name on the soldier’s monument opposite my apartment (they made sure to leave room), and another picture in the office of our local youth group? Is that enough blood for you? (The Gazans killed? Ask Hamas, not us.)

One bright spot. It seems the head of the Golani brigade, one of the army’s most elite (wounded, but he’ll be OK, it seems) is a Druze. I’m rather proud we have a Druze (which splintered from Islam centuries ago and are fanatically loyal to the State) in charge.

I need to correct; it turns out they were killed by an explosive device under the vehicle.

I’m going to the funeral today in the Haifa military cemetery. I have to confess, after over six years living here in Israel, it’s the first time it has struck me personally. (You realize that at just about every decent-sized company, there an empty desk somewhere, whose occupant (almost always male) has been called up.

According to the article, we finally got our Curtis LeMay (h/t Bill whittle), a “bad cop” that the “good cop” Prime Minister can point to as an excuse for not being more reasonable. Strange role for a pragmatic businessman like Bennet, but there you are.

Was it possible to discern the other side of the conversation?

Obviously it’s an extrapolation but it would seem credible that the State Dept. personnel are manipulating Kerry and goading him in his current line of argument. A stint at HRW, one of the most noxious and hypocritical NGOs is becoming de rigueur for a job at State. Even if Kerry were to be replaced tomorrow, these employees and diplomats can and no doubt will still continue to exert great influence on foreign policy.

BTW, Kerry is not simply a moron, he is one of the biggest traitors in the history of the United States. And he is following Obama’s policy faithfully. It is amazing that we have enough support in the United States to shut the two of them up.

Ah, I see an accord…

Kerry is a COMPLEX moron!

There needs to be much more effective pushback on the media for claiming Israel is responsible for the Palestinian civilian deaths.
1. Use of civilians as human shields (as documented in this post). This has received more media attention.

2. The fact that many rockets (minimum 20% is the figure quoted) fall short and kill Gazans. Hamas has also packed the rockets with ball bearings, designed to cause maximum atrocities when they hit Israeli civilians and the civilians of Gaza suffer accordingly when the Hamas rockets fall on them.

3. The secondary explosions. If your home, in a residential neighborhood is hosting explosives and the home is bombed by the Israeli army with pinpoint precision, there will be significant damage to homes in the surrounding area as a result of the secondary explosions, not the primary bomb.

4. The material used by Hamas to construct the underground tunnels would be adequate to build a bomb shelter for every civilian in Gaza. In spite of the fact that Hamas was in an all out effort to prepare for war, no bomb shelters were constructed for civilians.