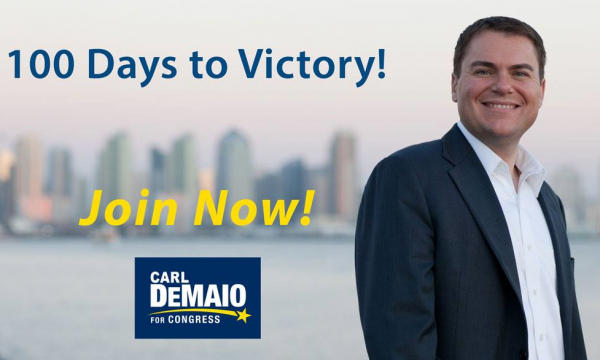 The Morning Insurrection newsletter reminded me that today would be a great day to take a look at the state of the congressional race in my district (CA-52), which is pitting Democratic incumbent Scott Peters against a former city council-member and veteran GOP campaigner Carl DeMaio.

We have covered this race before:  #CA52: Flip opportunity against 1st term Dem in evenly split district

As of today, the district remains a very distinct “flip opportunity” for Republicans to gain a seat in the House.  According to Roll Call, Peters holds an exceedingly slight lead over DeMaio.

Peters leads DeMaio, 48 percent to 43 percent — slightly outside the survey’s 4.9 point margin of error. The poll was conducted by GBA Strategies and surveyed 400 likely voters via live telephone between July 20-22.

This race in California’s 52nd District, located in and around San Diego, is a top Republican target in November. The National Republican Congressional Committee has touted DeMaio as a top recruit in the district that President Barack Obama won with 52 percent last cycle.

DeMaio must be upsetting all the right (wrong?) people, as his campaign offices were just vandalized:

That the Peters campaign is now attempting to gin-up his base with “Tea Party” charges against DeMaio is good evidence that his real poll position is less than stable.

Here an example of the tactic from Peters’ campaign website:

As a San Diego councilmember, DeMaio was more obstructionist than legislator –a dead-giveaway for how he would behave in Congress. The evidence is overwhelming that he would be the same force of divisiveness and obstruction in our nation’s capital as he was in San Diego.

It’s why he’s backed by the same Tea Party extremists who have hijacked the national Republican Party and produced the worst political gridlock in our nation’s history.

As a Democrat who is a member of the local Tea Party (which is why this gem landed in my “inbox”), I would like to refute Peters’ main charge. While DeMaio is popular among our members, it is not because he is obstructionist on any policy beneficial to the taxpayers. If fact, the pension reform measures DeMaio promoted is the biggest reason for “Tea Party love”….and a leading reason why San Diego is not on the ever expanding list of “bankrupt cities”.

Additionally, DeMaio is one of the rare politicos who understands what most citizen activists have learned since 2009: You have to be willing to challenge the leaders in your own party (via KUSI).

Here is what the the Democratic National Congressional Committee 2014 has to say about DeMaio:

Wonder Where Carl DeMaio Stands? With the Tea Party

Carl DeMaio proudly claims to be a “new generation Republican,” echoing Washington Republicans’ message-tested slogan. But on the issues that matter to San Diegans, Carl DeMaio’s record and the Tea Party’s agenda in Washington are one and the same.

To highlight the truth behind DeMaio’s Tea Party record, the Democratic Congressional Campaign Committee launched the web site www.newgenerationrepublican.org. There, Californians can see for themselves just how closely DeMaio’s record aligns with the Tea Party’s priorities.

As amusing as this is to me, as a co-founder of a dreaded “Tea Party” group, I sense that as we get closer to November 3, 2014, many more fine conservative candidates are going to be painted as “being hijacked by Tea Party extremists”. The Democrats will scare their base, as they have no real solutions to the myriad of crises now upon us.

I now offer the Eastman Theorem of Elections: The more Republicans labeled as “Tea Partiers”, the worse the end results will be for the Democrats. For example, if Senator Lamar Alexander prevails in his primary, then is accused of being a “Tea Party tool”, then expect truly historic election results favoring the GOP.

I will simply point out that despite the best efforts of our elite media and entrenched politicians to equate the values cherished by our members as insane, the fact that we have been right about issues like Obamacare and immigration will be remembered this November by an electorate increasingly unhappy about the direction the nation has taken.

DeMaio is likely to be one of the electoral beneficiaries of voters’ enhanced appreciation of Tea Party’s real core principles, as well as their dissatisfaction with the “business as usual” approach incumbents like Peters has offered.

la la la “Criminals, Tramps and Thieves, we hear it from the Party of the (well it’s not the GOP!)” la la la

It would be great to add Carl to our group of 5 congressmen here in San Diego.
Sounds like Scott is getting desperate.

Yes. It would be good to have Carl among that most rare of animals: the sane California congressmen.