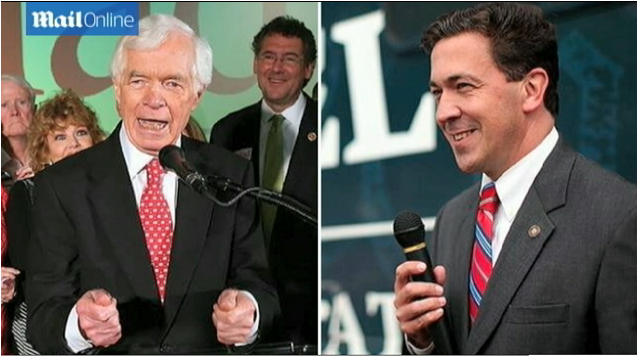 [The ads] claimed that supporters of conservative McDaniel had connections to the Ku Klux Klan and that McDaniel had a ‘racist agenda.’ They also warned that black Democrats ‘could lose food stamps, housing assistance, student loans, early breakfast and lunch programs and disaster assistance’ if he were to become the Republican U.S. Senate nominee.

‘Vote against the tea party. Vote Thad Cochran,’ one ad said. ‘If the tea party, with their racist ideas, win, we will be sent back to the ’50s and ’60s.’

MailOnline has learned that ‘Citizens for Progress’ is tied to a longtime Democratic political operative who was paid $44,000 to run racially explosive ‘robocalls’ in the same race.

A political action committee founded by former Republican National Committee chair and former Republican Gov. Haley Barbour made those payments.
The calls were placed in predominantly black and Democratic regions of the state during the final days before Tuesday’s runoff, according to a political operative in Mississippi.

Mitzi Bickers, an Atlanta pastor and former president of the Atlanta school board, used the same nonexistent group name – ‘Citizens for Progress’ – in a 2013 campaign for a local sales tax proposal.

Bickers, an African-American and former senior staffer to Atlanta Mayor Kasim Reed (D), resigned her city hall job in 2013 after filing false financial disclosures about her political work, according to the Daily Mail report.

The article specifically ties a second progressive activist to the payment for the radio ads to be placed. Carol Stern, a left-leaning former marketing executive, paid the Mississippi radio station to run the racially charged ads based on evidence provided to the Daily Mail.

You won’t see this in the US media – unless they just now magically decide to do some “random act of journalism.”

This is truly disgusting. Mark Levin tweeted this out earlier today – listen to his show tonight if you want to hear his response to this outrage.

“They also warned that black Democrats ‘could lose food stamps, housing assistance, student loans, early breakfast and lunch programs and disaster assistance’ if he were to become the Republican U.S. Senate nominee.”
++++++++++++++++++

Vote for Cochran and keep all your “free” $hit coming!

Makes one wonder what the difference is between Thad and a Democrat.

This is disgusting. The a Democrat party does not need help from the Republican Establishment to bash the TEA Party.

Has the Republican Establishment forgotten why the party won in 2010?

Ask them, they’ll tell you the Tea Party movement had nothing to do with it.

Not quite. They’ll tell you that Republicans would have won bigger if those divisive, racist, exclusionist fruitloops hadn’t turned off so many moderate, reasonable centrists. If they think that’s happening now (which they do), they must think it happened in 2010 too.

Of course, the fact that GOP elites like to paint the Tea Partiers as crazy reactionaries has nothing whatsoever to do with any electoral losses by Tea Party candidates. Nothing at all.

This is despicable. Actionable defamation.

So what does Bruno Lesky have to say about this?

Cool! Girls’ cage fight redux! Thanks for the invite.

Here’s my take. I don’t sh*t on the (in the instance you site — black) folks (in the Mississippi Rep primary) led to the slaughter by The Man. As Charles Murray points out, he’s often booed on elite campuses when he notes the FACT that 50% of the US citizenry have a below-average IQ.

iQ — you obviously are gifted and above the 50% — is genetic. It’s luck! How you apply it takes more doing.

So pick the correct target in this scene. It’s not the fellow who has no other attractive philosophy offered to him that he can understand other than to grab the $ and run. It’s the manipulative … you know, I have many favorite words to insert here but not for the internet or for this site so just falling back on the mild “a&&wipes” who close the door to a fulfilled life to the dupes they manipulate. These evil doers should be the target of your screed.

Oops… Not finished! Got much more to yap with you about. I was editing the syntax of what I wrote but pressed the wrong iPad key (you’ve been helping me with this but I’m a slow learner). Well. Um. Interested, as always, to hear what you have to say.

Readers might not be aware that the dialog between Juba and me began in the comments section following William, A. Jacobson’s earlier post: “I’m a Republican….” Context matters.

Aren’t we always being told there are more whites than blacks on welfare and it’s racist to suggest that blacks are disproportionately on the dole?

Yes, we are. Until Democrats find it convenient to say that any concern about out-of-control welfare spending amounts to an attack aimed specifically at black people.

Where is Estragon to defend his GOPe candidate? To urge us to unite! To get with the program! To call us racist!

Sometimes I think that guy is Karl Rove.