Another move to stack the deck in favor of BDS 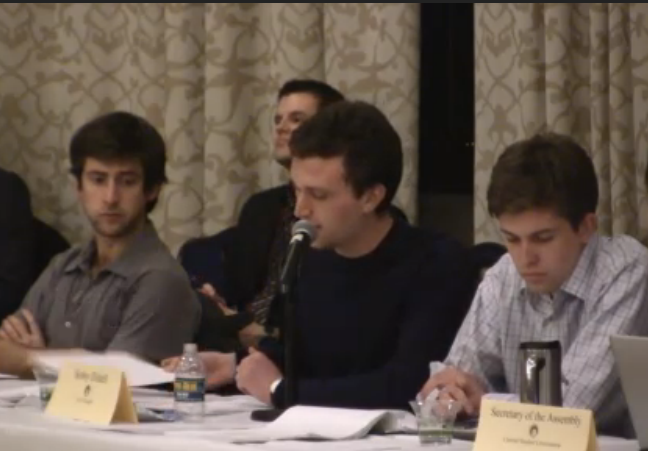 These trips and advocacy training are critical because some campuses have become openly hostile to pro-Israel students as a result of “direct action” and other intimidation by relatively small but highly coordinated anti-Israel groups like Students for Justice in Palestine. Professors actively participate in demonizing pro-Israel students.

Here’s UM CSG Vice Pres @Bobby_Dishell at AIPAC: http://t.co/dYE6kOJ9xJ He has learned from the best.

So I was not completely surprised when I learned from reader emails over the past several days that there is an attempt at UCLA to disqualify any student who received pro-Israel training or trips from being on the Student Council.

Because of my trip to Vassar and follow up, I didn’t have time to write it up. So I’m glad that two others have done so.

Jonathan Tobin at Commentary writes, The Next Step in the Campus War on Jews:

… some students—especially Jews—have been to Israel on trips where they learn the other side of the story from the pro-Palestinian propaganda that is often shoved down their throats in classes or at college forums. So rather than merely accept the lies about Israel being an “apartheid” state they can lean on their own experiences and speak about the equal rights that are held by all people in the Jewish state or discuss the complex questions about the West Bank in terms other than that of an “occupation.”

That’s a problem for the BDS (boycott, divest, sanction) crowd, but they’ve come up with an effective answer to it: start a campaign seeking to stigmatize those who take trips to Israel sponsored by Jewish organizations. That’s what’s happening at UCLA where an election has promoted a debate over whether it is ethical for candidates for student offices to have been to Israel on a visit sponsored by a Jewish organization. This specious issue was raised in an article published in the student newspaper the Daily Bruin last week by two members of Students for Justice for Palestine, an anti-Zionist group. It was followed by an attempt to get the student government to enact a ban on its members going to the Middle East with pro-Israel groups. That failed but, as the Daily Bruin also reported, a majority of candidates for student government positions have now signed a pledged not to take such trips.

Roz Rothstein, Executive Director and founder of the pro-Israel group StandWithUs, blasted the initiative via email:

BDS activists are trying to intimidate student leaders and prevent them from learning about Israel.  This is bigoted—because only Israel is being targeted.  It is absurd because student senators are not expected to vote on foreign policy issues.  It is also hypocritical because if applied fairly, candidates would also be forced to completely disassociate themselves from the BDS Movement. They would not be allowed to attend divestment training sessions, SJP conferences, or pro-BDS events in general, because BDS promotes hatred and marginalizes so many students on campus.

It’s no surprise that BDS seeks to disqualify these students, who have been among the most effective, such as Bobby Dishell at University of Michigan:

This move needs to be fought.

The editorial board of Al-Talib, the Muslim Newsmagazine at UCLA, called on Jewish student Avinoam Baral to disassociate himself from the pro-Israel program Hasbara Fellowships due to the group’s alleged Islamophobia. Al-Talib alleged that the Jewish program “actively (contributes) to violence against Muslims” and asked that Baral, who is a candidate for Internal Vice President in upcoming UCLA student elections, separate himself from the program.

The newsmagazine asked that Baral “publicly distance himself from the organization Hasbara Fellowships because of its association with the production and dissemination of Islamophobic documentaries across the United States. Unless Baral distances himself from an organization that disseminates Islamophobia, ties to anti-Muslim networks will remain accepted in campus life and politics.”

TruthRevolt asked Ibrahim Hooper, the Communications Director for the Council on American Islamic Relations (CAIR), whether or not the organization approved of the editorial’s request, to which Hooper replied, “Your apparent hostility to Islam and Muslims seems to have you grasping at straws.”

You know, if nothing’s blocking the traffic, it doesn’t take long to get from UCLA’s Westwood Village to Rialto, California.

I have to admit… it’s truly incomprehensible that this is happening at all.

In all honesty I’m not surprised at all. As the first Muslim Brotherhood front group in North America, it’s always been the mission of the Muslim Student’s Association to Islamicize college campuses. And the SJP does work closely with local MSA chapters. Such as at UCLA, which I believe is the nation’s largest MSA campus.

It’s not even funny to hear the MSA-allied SJP calling Israel an apartheid state when Muslim countries are genocidal states. The Palestinians demand the right of return to Israel when they openly declare that Palestine will be Judenrein. I don’t think I risk running afoul of Godwin’s law considering we’re talking about a region where Mein Kampf is a best seller. Look at what Syrian rebels, particularly the vile ISIS, do to Christians when they take over a town. I’m sure the Syrian rebels would love to kill some Jews, but as is the case with most Arab countries, they’ve already left or been killed. When the twerps who make up the membership of SJP go to Nigeria and track down those mostly Christian girls Boko Haram just kidnapped, then I’ll let them tell me about the horrors Israel inflicts on the Palestinians. But they won’t even notice so great is their hatred for Israel and, dare I say it, their antisemitism. And let’s face it, their hatred for Israel is just an extension of their hatred for America and the West in general.

A little light reading about the history and mission of the MSA. Much of it is sourced from the evidence the government introduced at the Holyland Foundation trial.

It is not at all incomprehensible. If you understand the Islamic desire for genocide of the Jews, then this whole drive by the SJP crowd is comprehensible. Follow the money. Google MSA actin in CA universities. Muslims have brought their Jew-hatred with them and have ensured it will prosper via megamillion donations to top universities all across America.

This is not about stifling free speech. That is just a tactic. The end game is genocide of all Jews. That’s why I advocate making clear the historical connecton between Muslims and the Nazi genocide of Jews.

The Collective is quite committed to its shutuppery, and you can count on them finding new, completely outrageous modes to try.

See also the FCC threats to quash voices on the right. All part of a piece.

You know, it’s getting to the point where I’m almost starting to hate college-age kids.

Yeah, I’m grumpy. My wife told me so this morning.

But I’ve almost cheered out loud watching Jonah Goldberg say, when he’s speaking at a university to students, that he loathes “youth politics.”

Isn’t it strange how Sidney Blumenthal’s kid ends up duplicating the tactics of the McCarthy- era Red Channels?

These illiberals must be opposed, but this might also be seen as something that contributes to a coming wave of repudiation of these misguided forces and manifestation of hate, and not just for the idea of Israel.

A professor who demonizes students has no place on a campus of any sort.

So many of these students are actually foreigners on student visas. This program needs to be reformed forwith, and zero visas should be issued to Arab countries except to religious (including certain Muslim) minorities, who use them as the first step to refugee status.

Obama has unleashed the Collective.

And I mean REALLY, REALLY. In so many ways, none of us may really understand them.

Meet the new Nazis. Not as hygienic as the old Nazis.

I’m sure that if these anti-Israel campus activists were to muster with all their might the full depth and breadth of all the critical-thinking skills that have been lavished upon them and imparted by their professors … that they could come up with some final solution to this problem.

What’s happened to my alma mater?

Of course, traffic was just tied up as Spielberg was presenting Obama with an award. As deserved as the Nobel Peace Prize. Obama laughs at those born with mere silver spoons in their mouths. They still have to do some work.

*Presenting him with an award at USC.

There is a thinly-veiled (or, perhaps, not so veiled) anti-Semitism at the root of all of this anti-“Zionist,” anti-Israel agitation and histrionics on the nation’s college campuses that I find deeply disturbing. Not just for its broader implications in society, the media and in academia, but, also because the Left — which prides its itself on its alleged “tolerance” and cultural sensitivities — has wholeheartedly embraced these movements. And, so much of the infantile talking points embraced by these groups are rooted in distortion, ignorance and vitriol, that it is impossible to have any kind of substantive, civil discussion or debate with them. This, perhaps, is the Left’s most indefensible trait — it has no desire to engage in debate by arguing the substantive merits of its positions, but, rather, has decided to take the lazy way out by seeking to intimidate and to silence those people whose viewpoints are at variance with its own.

I’m assuming that the groups would have no problem if a student visited Saudi Arabia to witness that country’s appalling human rights record. Funny how the Left always selectively and myopically chooses its outrage.

I had wanted to comment on the issue of what we are seeing with todays generational antisemitism (I want to believe it’s their youth) but you have stated it perfectly here.

What will be their future reality when they have already chosen this time of their life to live so narrowly? I suppose you do not have to live in a 3rd world country to be ignorant.

Go graphic, for goodness sake! This BDS stuff is funded by Muslims, George Soros, and other anti-Semitic nuts.

All around UCLA, splash pictures of the Grand Mufti of Jerusalem, Amr Hussein posing with Himmler and Hitler. Anwar El Sadat, speaking of the Nazis, strongly desired Rommel to make it to Egypt because ‘the enemy of my enemy is my friend.” Had Rommel made it to Egypt, the Wehrmacht and Gestapo, eventually, would have made it to the region of Palestine, and the Jews who had long lived in Israel would have been exterminated.

Paint these SJP as the Nazis they are. Their intent has been genocidal from jump. Ram it down their throats. Remind the world of who they are. Shame people into disassociating from them.

The Nazis are on the rise, on campus. It’s time to take direct action to protect ourselves. A few dozen broken heads and shanked kidneys will get their attention.

[…] University law professor William Jacobson, who has been following the controversy closely on his blog, Legal Insurrection, said that while students have a right to […]