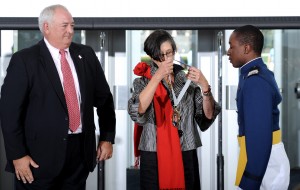 Bob and Susie Schulte present Cadet 1st Class Mychol Alexander with the first Lieutenant Roslyn Schulte Award for Cadet Character and Leadership during a ceremony at the Air Force Academy’s McDermott Library May 25, 2010. The award is named for Mr. and Mrs. Schulte’s daughter, 1st Lt. Roslyn Schulte, who was killed by a roadside bomb near Kabul, Afghanistan, May 20, 2009. (U.S. Air Force photo/Johnny Wilson)