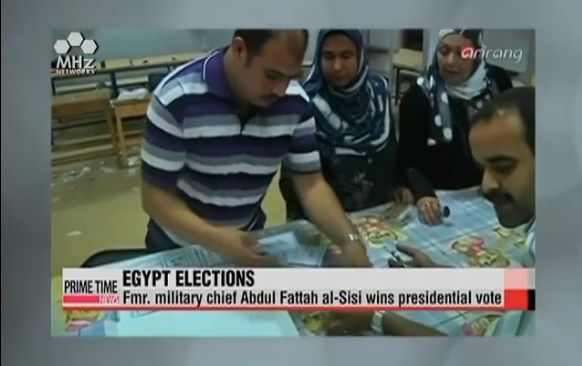 General Abdel Fattah al-Sisi, the former Egyptian army chief who deposed the Muslim Brotherhood’s Mohamed Mursi, has officially won the country’s presidential election with a margin of victory as large as the Great Pyramid.

Abdel Fattah al-Sisi, the general who toppled Egypt’s first freely elected leader, took more than 90 per cent of the vote in a presidential election, provisional results showed on Thursday, joining a long line of leaders drawn from the military.

I find it interesting that many of the elite media outlets are harping on the “lack of opposition” and the election’s “low voter turnout” to color the news about Sisi’s win.

The landslide victory was tainted by few signs of a credible opposition and low voter turnout. Authorities declared Tuesday a holiday and pushed voting to a third day Wednesday.

According to current President Adly Mansour, nationwide turnout was about 46% — below the nearly 52% turnout in the election won by Muslim Brotherhood leader Mohammed Morsi in June 2012. Sabahi says the turnout figures lack credibility.

The low turnout could weaken al-Sisi’s authority to make tough and important economic changes such as cutting energy subsidies that eat a big chunk of the country’s budget, says Anna Boyd, a senior Middle East and North Africa analyst at IHS in London.

It turns out the number was closer to 48%, which is heartening given the level of turmoil and Islamic extremist threats the Egyptians have been exposed to since Arab Spring sprung in 2011. In comparison, the relatively serene 2012 American presidential election had a 57.5% turnout of eligible voters, and I fail to recall any of the elite media saying that it “weakened Obama’s authority.”

Here’s another statistic I would like to share: Sisi has a higher “favorable” rating among Egyptians than Obama does among Americans.

And, unlike Obama, it appears that Sisi is willing to do the hard work. And Sisi will have much work ahead of him, as he focuses on improving Egypt’s dire economic conditions. However, it looks like the country’s business community believes his election is a step in the right direction.

Mohamed El Sewedy, chairman of the Federation of Egyptian Industries, said, however: “The business community is very happy about the results. We need real reform and opportunities … a guy with courage to take decisions.”

Sisi is seen by supporters as a strong figure who can end the turmoil that has convulsed Egypt for three years since the revolution that ousted Hosni Mubarak after 30 years in power.

…Sisi enjoys the backing of the armed forces and the Interior Ministry, as well as businessmen who thrived under Mubarak and are still highly influential.

Sisi also has the support of Saudi Arabia, the United Arab Emirates and Kuwait, which see Mursi’s Muslim Brotherhood as an existential threat. Gulf Arab states pumped billions of dollars into Egypt to keep the economy afloat.

Morsi – ousted by the army in July of last year amid mass protests against his rule – issued six presidential decrees while in office from 2012-2013 that pardoned 52 Islamists, including nine leading members of the now outlawed Muslim Brotherhood and 18 jihadists convicted for a 1995 assassination attempt on then-president Hosni Mubarak in Addis Ababa.

Here’s to hoping Sisi can enhance the lives of his countrymen and the stability of the region while pushing back on Muslim terror groups. That would be a legacy as enduring as the Sphinx.

I still don’t understand why Obama-Clinton pushed Mubarak out. Maybe al-Sisi can restore the stability and relative peace that Egypt enjoyed for most of the past three decades.

What Egyptians want is food.

I wonder if we in Israel could have taught them what to do, if they could get over using us as a pet enemy.

They are as stupid as the Arabs occupying Judea. They prefer their hatred of Jews more than they prefer eating. Israel could teach them how to make the desert bloom. Which to choose? The Koran and kill the Jew or food? Hard choice.

Go ask the people of Egypt, they have had their blinders removed.

There is something about General Abdel Fattah al-Sisi – I feel he is going to show himself as a true leader the likes of which we have not seen in a long while – I hope and pray.

What stability and peace for the past what three decades? Assassinations. Bombings. Kidnapping of tourists. Oppression of the MB and the problems that caused. Unemployment. Oppression of women. Public assault of women, veiled or unveiled. The slaughter of Copts. The abduction and rape of Coptic women with false claims of conversion to Islam. And all of this before Obama and the MB overthrew Mubarak.

Egypt’s been an armpit with BO ever since the Israelites left.

Remember when he met with the MB on his trip out there? Getting rid of Mubarak paved the way for the caliphate. The problem was the MB, like so many terrorist groups and Obama, don’t know how to govern.

Mubarak was a snake — of course, all the leaders in Egypt are snakes.

But Mubarak was a doddering, near drooling snake and his time was clearly coming. That would have left (one could argue) a more dangerous power vacuum than engineering his removal from power.

Except, of course, we forgot two things —

1) Champ’s ideology is towards the Muslim Brotherhood, so engineering Mubarak’s removal puts vipers in charge of the country

2) Champ is incompetent, so “engineering” the removal of the leader of a client-state is beyond his ability.

Other than that it worked well.

The American media is just angry that the Muslim Brotherhood did not win. Under the rule of Islamists like Morsi Jews and Christians were being raped, tortured and killed with government approval. The American media believes the only good Jew/Christian is a dead one, so it is no wonder they approve of the Islamists.

It was happening under Mubarak, too. Christians in Egypt have dhimmi status.

True, but under Mubarak the government looked the other way while it happened. By contrast Morsi was part of an organization that preached (and practiced) intolerance of Christians and Jews.

97%? That’s about what Assad gets. It’s rather hard to accept.

97% is the “consensus” for AGW but the MSM tells us that its real.

Saddam got 100% in his last ‘election’. Worked out well for him.

Dictators have to learn that they need to cap their vote at about 70% or so. In any such election there are people who look around at their families, friends and neighbors, and they KNOW, very quietly, any number of such people who didn’t vote for El Caudillo. If you take 70% such people say “well okay I know some of the 30%” and then stew in silence. If you claim 93% such people scream fraud.

Chicago mayors know how to do this. 70% was always good enough for Daley the Elder.