DCCC desperation ahead of 2014 midterms showing. 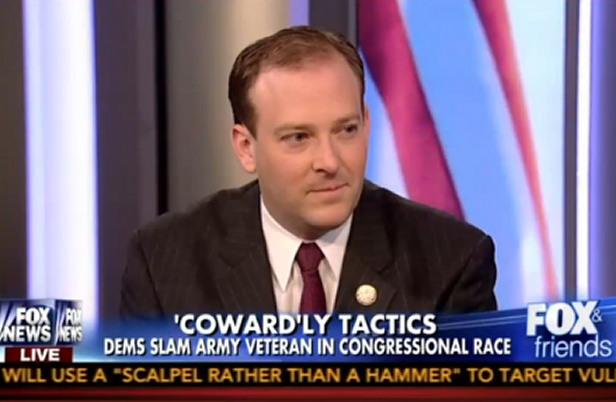 Republican Lee Zeldin is running for congress in New York and is an Iraq War veteran.

That didn’t stop the Democratic Congressional Campaign Committee from accusing Zeldin of being a coward.

In a post on its website, the campaign arm of the House Democrats is asking whether Republican Lee Zeldin is being cowardly about Republican Rep. Paul Ryan’s budget.

“Over a month after his House Republicans passed Paul Ryan’s reckless budget, Congressional Candidate Lee Zeldin is still too scared to admit how he would vote for the plan, even though he wants Long Islanders to send him to Congress,” the DCCC said in a release. “Even though every member of Congress had no choice but to vote yes or no weeks ago, what’s taking him so long to decide? There’s only one answer: Zeldin is either woefully uninformed, willfully ignorant or a coward.”

Well, you have some liberal Democrat hack who is hiding behind his Twitter account, stuffs his face with cheese doodles, sending out press releases on DCCC letterhead, shameful attacks. And the fact is Nancy Pelosi, Steve Israel, Tim Bishop, they’ve never served a day, and I think when I was sitting at the door on that Blackhawk and the drill master hits the back of your head, and you do what’s so unnatural, jumping out with your parachute, here you are, fast forward to today and you have these Democratic hacks out of Washington who want to change the subject and fling insults, saying that I’m a coward. It just doesn’t fit.

Democrats now are retreating from the claim, as reported at Newsday:

Democrats on Friday disowned a campaign email that called a Republican Iraq War veteran who’s seeking to challenge Rep. Tim Bishop a “coward” for not taking a stand on a controversial House GOP federal budget proposal.

The email sent by the Democratic Congressional Campaign Committee on Wednesday also superimposed the face of the veteran, state Sen. Lee Zeldin (R-Shirley), on a picture of the Cowardly Lion from “The Wizard of Oz.”

Both Rep. Steve Israel (D-Huntington), the DCCC chairman, and Bishop (D-Southampton) rejected the email after Zeldin condemned it on Fox News as a “shameful attack.”

“Rep. Israel was not shown the comments used to describe Iraq War veteran Lee Zeldin before they were sent out by DCCC staffers. He not only disagrees with these comments, but strongly condemns them,” said his aide Samantha Slater.

The real cowards are the dems who refuse to push back on Dingy Harry and Nancy. Why do extremist liberal views run roughshod over a party and an election? Dems, #growapair and stop lying and covering for the campaigner in chief.

The real cowards are the 60 Democrat senators who voted in lock step on the unread, unreadable, incomprehensible Patient Protection and Affordable Care Act just because it had a catchy name and their party bosses browbeat them into it.

Careful, good buddy, or you might be starting a personal relationship with a girl whose initials are I.R.S.

Memorial Day is almost here. Thank you vets for your sacrificial & now volunteered service. Thank you Lee Zeldin for your service to our country – defending even the liberties of those jerks who pen cowardly ad hominem attacks against you.

I will never thank a Democrat for their self-serving campaigns or be grateful for any election day that a Democrat is elected.

It’s perfectly possible to be physically brave and a moral coward. The attacks may be unjustified, but using Zeldin’s military service to criticize the attackers is, too.

If you’re going to call a man a coward, say it to his face. If you don’t, then you’re the coward. When you join the military, and this goes double for wartime, you are placing your fate in the hands of unseen people who may, for the very best of reasons, put you in a no-win situation that will cost you your life. That, my friend, is moral courage. Only an idiot plays politics by the rules of their opponents. Baiting your opponent is a tactic. Taking the bait is weakness.

What military service demonstrates is the ability for one to put the needs and well being of others before themselves. When a senator / representative / president can truly serve those they represent rather than the cause du jour, the highest bidder, or other criteria, then they truly are the product of the vision of our founding fathers. I am disgusted to see the divisive politics at play while republicans ‘are no angels’, it is truly dictator-sequel to state “you have to pass the bill to find out what is in it”. NO ma’am, we don’t.
I do not know the details of zeldin’s service but I applaud him for donning the uniform and serving his country. If only our elected officials would serve as well. (Begin by getting to the bottom of the VA scandal). I am a disabled vet and am disgusted by the games of the career ‘public servants’. It’s a failure of accountability and leadership.

I am sure the brave hacks in the DCCC will stand up and admit responsibility for the mailer. right? Oh wait…

“Even though every member of Congress had no choice but to vote yes or no weeks ago, …”

In the House, voting Present (an abstention) is still allowed, is it not?

So, another Dem mail fail; who’s surprised, show of hands?