To get Warren to understand why they are hurt and angry that she assumed, then discarded, Native American identity. 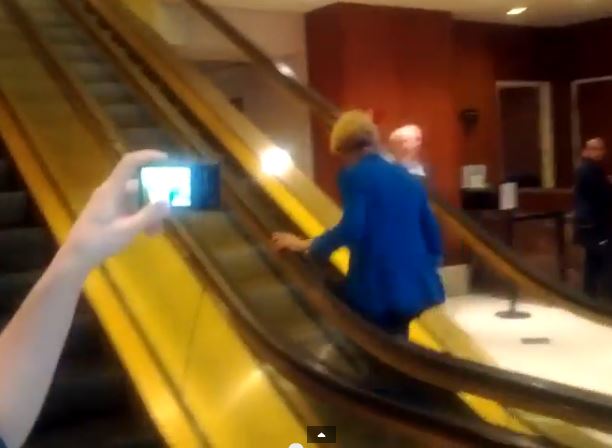 In Elizabeth Warren’s new book, A Fighting Chance, Warren claims to be “hurt and angry” that people criticized her claim to be Native American, specifically Cherokee.  Warren blamed the Scott Brown campaign, the local Republican Party, and “some blogger.”

In fact, Warren has no one to blame but herself for her false claim to be Cherokee.  Read Elizabeth Warren Wiki, and these posts responding to the claims in her book:

Warren will be launching a nationwide book tour.  Someone who wants to meet Warren is Twila Barnes.

Barnes is the Cherokee Genealogist whose groundbreaking genealogical research exposed the falsehood to Warren’s claims.  Barnes and her team of Cherokee genealogists traced Warren’s family lines back to the early 1800s and documented that Warren’s family not only was not Cherokee or other Native American, but also that they never lived as such:

Barnes also debunked much of the “family lore” used by Warren to justify claiming Native American status.  One of my favorites was Barnes’ discovery that Warren’s maternal great grandfather, on the supposedly Cherokee bloodline, was featured in the local newspaper in 1906 as being white and having shot an Indian. And also Barnes’ discovery that Warren’s parents’ wedding was joyously announced in the local newspaper, which would contradict Warren’s claim that her parents had to elope because her father’s family would not tolerate their son marrying an Indian.

When it was discovered that Warren had claimed minority status in the 1980’s in a law directory used for recruiting, Warren responded that she listed herself that way to meet other Native Americans, perhaps for lunch.  (Seriously.)

But when Barnes and other Cherokee women flew to Boston to try to meet with Warren to present the genealogical evidence that Warren was not actually Cherokee, Warren not only refused, she used her communications team to attack the women.  The Cherokee women never got to meet Warren.

When Barnes contacted me and told me of the plan to attend one of the book signings (and the difficulty she might encounter), I asked her for a statement.  Here it is:

“We would still like to meet with Senator Warren and share information with her. She’s in a position to make a difference for American Indians if she would be willing to meet with us and listen to our concerns. It’s just my opinion, but I think it would be an opportunity to take something negative from the past and turn it into something positive for the future.”

I wonder if Warren finally will agree to meet Cherokee women to better understand why they are “hurt and angry” that Warren falsely adopted their identity to try to advance her career and then discarded that identity once Warren got tenure at Harvard Law School.

Perhaps they could meet for lunch.

As kids growing up, we always thought that we were part
Cherokee. Our family had lived in the mountains of North Carolina since colonial times. And, our grandmother had the “high cheek bones” of which Ms. Warren has been so proud. And, moreover, it was common knowledge that many Cherokee had lived as White people, even early on. [[It is for this reason that the “rolls” and/or other self-statements are not conclusive proof of Native ancestry.]]

And, my wife found out that her old-line New York family was part Native.

So, why doesn’t Ms. Warren take the 23 and Me genetic testing? I think we all know why not.

Liked your comment. Once of my great-grandmothers had “high cheekbones”, and, as far as we know, she was 100% Norwegian (maybe a touch of Sami, but their charateristic is that they’re shorter than the non-Sami). Another of my Great-grandmothers had jet black hair, but she was Central European Jewish.

My 75% Chinese granddaughter is brown-haired.

Why can’t Warren do a 23andMe? It would put it to rest completely.

[…] blames the controversy over her fake Cherokee ancestry on “some blogger,” and since William Jacobson of Legal Insurrection was particularly merciless in exposing her lies, he’s giving credit where credit is […]

“Perhaps they could meet for lunch.”

Hey, I pledge here and now to provide the Oklahoma land crabs and the tomato mayonnaise for Princess Running Bare’s Pow-wow Chow recipe!

I go out and spear the crabs myself on my faithful moonpony Sparky.

I used to live in OKC and the crabs on the shoreline there were just wonderful.

I predict Warren ultimately concedes she is not Cherokee. She simply has to figure out how to exploit the situation and turn what ought to be a negative into a positive – either financially or politically. Or both.

One Possible Scenario:
Warren and Twila get invited to sit next to each other on a TV personality’s couch. [Pick one: Oprah’s couch, Barbara Walter’s couch, Diane Sawyer’s couch, etc.]

Warren asserts she was innocently repeating the story told to her by her family and she tearfully expresses deep regret for the angst her fairy tale created among authentic Cherokees. She then thanks Twila for her diligent research and gives her a warm hug.

With that, the record is set straight and Warren publicly redeems herself. It is now behind her once and for all. Oprah (or Barbara or Diane) get good ratings. Warren gets a bump in book sales. Twila gets used for Warren’s benefit.

You don’t know just how sorry I am that my full-blooded Cherokee Aunt is gone. She’d have had a field day with this imposter. I only saw her lose her temper once, but it was memorable.

“Warren responded that she listed herself [as a minority] to meet other Native Americans, perhaps for lunch.”

Holy life imitates art! It’s getting so you can’t tell the parody from real life any more. From the brilliant “Stan Freberg Presents The United States of America”, here’s “Take An Indian To Lunch (This Week)”:

I suppose that serving fried Arizona jackalope is out of the question since it’s extremely endangered. But the taste is out of this world, and it doesn’t taste like chicken.

Warren will avoid that meeting at all costs.

Wait a minute! Warren is traveling the country on a book tour? She’s a U.S. Senator and a full time employee of the U.S government paid for by taxpayers.

Where does she get off selling her book when she is supposed to be working? The citizens of Massachusetts, in particular, should be outraged.

Yes, but there’s a lot to be outraged about. Our governor has kidnapped a Connecticut girl, denies her religious practice, schooling, and medical care, and has armed guards at her weekly family visits. Deval wants her dead to avoid legal problems with covering up kidnapping and false imprisonment.

On April 18th, Liz spoke at a commemoration of MIT Officer Collier who was murdered by Russian terrorists. She gave some bizarre quote from “scripture.” I’m waiting for the video. She is a disgrace.

Besides, Elizabeth’s antics are nothing to a state that sent Teddy the Swimmer back to the Senate for (how many?) years…

You’re doing it wrong, Ms. Barnes. Don’t arrange to attend one of the book signings.

Arrange to attend ALL the book signings, until Sen. Warren cancels the tour.

The press should (but won’t) throw it right back in her face at every opportunity.

“Senator Warren, do you feel that your Native American heritage gives you a unique perspective into the current situation in Nevada?”

“Senator Warren, are you offended as a Native American that the Washington Redskins will not change their name?”

“Will you be joining fellow Native Americans to protest the Redskin name?”

“Senator Warren, studies show that only “x”% of Native Americans graduate from college. Do you think that they face discrimination? Did you feel discriminated against as a Native American, and if so, how did you overcome it?”

Let’s give Warren a “Fighting Chance.” Let’s put her in the ring with a Cherokee woman for a few rounds. “Some blogger” can give the color commentary.

Now that thar is microaggression. I feel I’ve been triggered…

Elizabeth Warren needs a Native American name and I think we should help. Well, no I don’t. I think we should use the isolate and ridicule section of the Alinsky book to give her one. I’ll suggest one or two and hope for better from fellow posters:

Dances With Lies
Stands With A Smirk

Dances With Lies. Good one. Might add “white” lies?

“You didn’t build that teepee.”

There are few things in this world cuter than a law professor that thinks truth makes any difference to these people. Well that and baby pandas.

Many people are very mistaken about their histories. She is so awesome about everything else, I’m giving her a pass.

“The Cherokee Indians have the distinct physical characteristics associated with Native Americans. This includes high cheekbones, a bent nose, reddish brown skin tone and coarse, dark hair. Almond-shaped, heavy eyes are characteristic of Cherokee Indians, a trait that is due to an extra fold in the eyelid. Sometimes Cherokees have crooked fingers, especially the little fingers. Another physical characteristic is hidden behind the teeth, a ledge that gives the teeth a shovel appearance. An inverted breastbone is also common, a trait that leaves an indentation in the chest; it is sometimes called a “chicken breast.” All of their unique characteristics are due to genetic mutations that have been passed down through the tribe over thousands of years. Modern DNA analysis has allowed these traits to be traced and tracked and can help to identify those with Cherokee or other Native American blood.”

I nominate Rags to inspect Elizabeth Warren’s breastbone for inversion.

Gawd will get you for that. The only “chicken breasts” I wanna see are on the KFC samich.

What did Rags ever do to YOU??