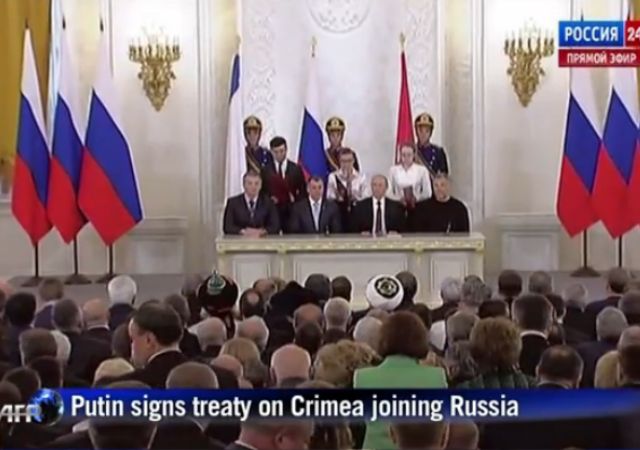 With ongoing developments on the crisis in Ukraine, here are some news updates from Tuesday.

A signing ceremony Tuesday between Russian President Vladimir Putin, the Prime Minister of Crimea and the mayor of the city of Sevastopol made it official, the Kremlin said in a statement. The territory, ceded to Ukraine in the Soviet era, is now part of the Russian Federation, it said.

The annexation — which had not been expected to occur until Russian lawmakers met later this week — was met with a howl of protest in Kiev, where Ukrainian Prime Minister Arseniy Yatsenyuk called it “a robbery on an international scale.”

Also Tuesday, a Ukrainian soldier was reported to have been killed on a base in Crimea and another wounded, though some of the details appeared to be unclear at the time of this writing.

Ukraine said one of its soldiers was killed in Crimea Tuesday in the first case of bloodshed since Russian troops and pro-Kremlin militia seized the rebel peninsula almost three weeks ago.

“The conflict is shifting from a political to a military stage,” Ukraine’s Prime Minister Arseniy Yatsenyuk told an emergency government meeting.

“Russian soldiers have started shooting at Ukrainian military servicemen, and that is a war crime,” he said at the nationally televised session.

He was speaking after President Vladimir Putin signed a treaty claiming Crimea as Russian territory following the Black Sea region’s overwhelming vote on Sunday in favour of switching from Ukrainian to Kremlin rule.

Regional defence ministry spokesman Vladislav Seleznyov told AFP the soldier had died after being shot in the neck when a group of gunmen stormed a Ukrainian military base in the northeast of Crimea’s main city of Simferopol.

Seleznyov said another soldier was wounded but did not specify whether the base was stormed by Russian soldiers or pro-Kremlin militia who also patrol the peninsula.

President Obama invited G7 leaders for an emergency meeting next week to discuss additional steps the allied leaders may take in response to the situation in Ukraine, according to the Associated Press, Obama invites G7 leaders for meeting on Ukraine:

President Barack Obama on Tuesday invited allied leaders for an emergency meeting in Europe next week to discuss further action in response to Russia’s involvement in Ukraine, as world economic powers considers whether Moscow’ should keep its membership in their organization.

White House spokeswoman Caitlin Hayden said Obama wants to gather leaders of the Group of Seven nations and the European Union to meet on the sidelines of a nuclear summit next week in the Netherlands. Russia is one of 53 countries which will participate in the nuclear meeting in The Hague.

In a statement, Hayden said the meeting that Obama is organizing “will focus on the situation in Ukraine and further steps that the G-7 may take to respond to developments and to support Ukraine.”

And Vice President Joe Biden was in Poland Tuesday to discuss the crisis in Ukraine and show support to allies in the region while also intending to send a message to Russia’s President Putin.

From another Associated Press report via Yahoo News:

Stepping into a region on edge, Vice President Joe Biden came to Poland on Tuesday to reassure anxious allies that the U.S. will stand up to Russia’s aggression in neighboring Ukraine, even as Moscow brushed aside stern warnings from the West and signed a treaty to annex Crimea.

[…] Biden’s visit to the region is part of a broader U.S. campaign to send a clear signal to Putin following Sunday’s referendum in Crimea, which the U.S. has dismissed as illegal. In coordination with Europe, the Obama administration has frozen the U.S. assets of nearly a dozen Russian and Ukrainian officials. But Putin appears to have reacted with a shrug, and Obama’s critics contend the U.S. steps thus far amount to a slap on the wrist.

During a joint press conference with Poland’s Prime Minister, Biden denounced Russia’s actions in Ukraine and accused Russian leaders of “respond[ing] with a brazen, brazen military incursion, with a purposeful ratcheting up of ethnic tensions inside Ukraine, with a rushed and illegal referendum in Crimea that was, not surprisingly, rejected by virtually the entire world.”

When it comes to purposeful ratcheting up of ethnic tensions, this administration and the Democratic Party know what they’re talking about.

Another victory.
Another display of fluent and competent mastery in the area of foreign policy for the Obama administration.

Obama didn’t even know he was in a fight until Putin had already drop-kicked him out of the Middle East and pinned him to the mat in Ukraine.

Yeah, Obama gets the US behind the Muslim Brotherhood that even Egypt couldn’t take and threw them out.

Every time I hear Obama denouncing Putin’s refusal to obey laws, I just bust out laughing.

Obama was overheard arguing with one of his aides, that Putin will have to postpone, delay the take over. And when that happens, that’s when he plans to make his move.

The aid had to tell Obama that Crimean’s signing rate was over 90%. Getcovered.

..and while Putin was annexing Crimea our fearless leader was on ESPN picking his March Madness favorites.