Human Rights are in the worst of hands at the U.N.

Human Rights are in the worst of hands at the U.N.

The continuing and absurd U.N. vendetta against Israel 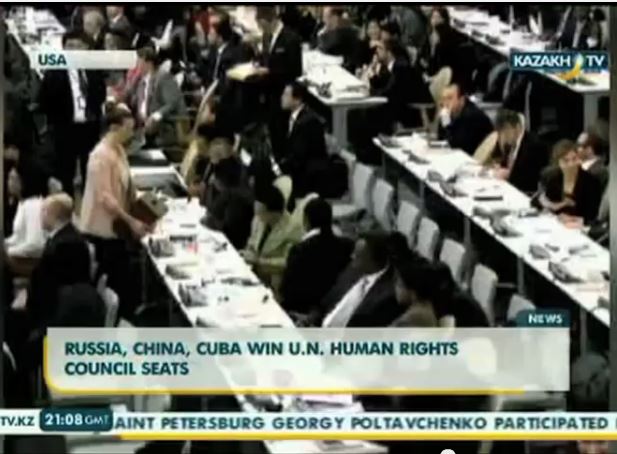 So much of the propaganda against Israel comes from the United Nations.

But the U.N. human rights bureaucracy has no credibility, as this video demonstrates.

Maintaining membership in the UN MAY have some merits.

There is no reason to host or fund this organization that is inimical to our values and interests.

I’ve always felt it should be Geneva or Brussels.

Saudi Arabia turned down a seat on the United nations Security Council, right after having elected to it (I suspect that reflected a power struggle, and indecision as to what its exact foreign policy was going to be) but it was happy to accept a seat on the Human Rights Council?

We should stop funding the UN now. Our president will not allow it.

The United Nations should be constantly mocked and thrown out of the country. Our political leaders will not allow it.

Conditions in these countries should be among the stories on the front page of every newspaper in the country. Our print media management will not allow it.

Conditions in these countries should be a constant topic of discussion in parishes of all denominations everywhere in the country. Our religious leaders will not allow it.

But then, if the things that should be above the fold, at the top of the hour, and of moral concern, were, there would be neither enough paper nor hours in the day to accomodate them all.

“Land of the free, home of the brave;” it seems our leaders do not want to allow it.

In a 9 1/2 furlong race toward crazy, it would be difficult to handicap either the U. N. or contemporary American Academia.

Plus it would be so inhumane…

since both are so lame.

The UN served an essential purpose during the first quarter-century of the Cold War, providing the superpowers a neutral site for backdoor communications to avoid and resolve conflicts.

After Nixon established closer direct diplomacy with the Soviets and Chinese, there was no longer a practical need for the UN, although diplomatically using the Security Council to back us helped some.

Now, after the fall of the Soviet Empire and in the age of instant communications worldwide, the UN is “about as useful as teats on a boar hog.” It wastes valuable Manhattan real estate while causing traffic and parking problems for decent, taxpaying Americans. It is now mainly a place for the friends, families, and cronies of despotic rulers to party with the stolen wealth of the poor in their countries.

Brussels would welcome it with open arms.

We also are “assessed” roughly 25% of the total costs of the UN as our “dues.” Careful consideration shows that not more than 100% of that is wasted.

There are some useful UN-based organizations, but they are not funded by the basic UN budget.

The U.N. gives cover to all sorts of attaché spying. Some of them are useful to us and some not.

Send the U.N. to Antarctica for further discussions on global warming. And, let’s send the FCC with so they report back to us about the U.N.’s human rights discussion.