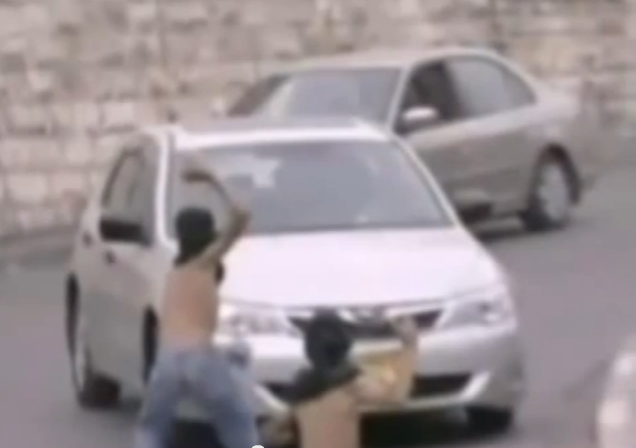 Israel’s Justice Minister (and former Foreign Minister) Tzipi Livni has been sounding the panic button on the international boycott of Israel for at least a year. It was part of her political platform for elections, but her party still managed only a small percentage of the electorate.

Livni’s latest was reported today in The Times of Israel, Livni: We face South Africa-style isolation because of settlements:

If Israeli-Palestinian peace talks fail, Israel will be subjected to international isolation similar to that which brought about the collapse of the Apartheid regime in South Africa, Israel’s Justice Minister Tzipi Livni, who is leading Israel’s negotiations with the Palestinians, warned on Saturday.

“The world does not understand the settlements,” Livni said in a Channel 2 TV news interview. “The peace negotiations are the wall stopping the wave [of international boycott pressure]. If there is a crisis [in the talks, that wave] will crash through.”

Asked whether Israel would face the same kind of isolation as South Africa did, she replied, “Yes.” Because of the dangers, Livni said: “I’m screaming, ‘Wake Up!’”

The problem with this panic is multi-fold.

First, the boycott that is threatening Israel in the near-term is not the BDS Movement, which is strong in Europe but confined to isolated, radical sections of academia and a small number of campuses in the U.S.

Livni is right to recognized the problem, as I do, but the BDS movement is not currently a strategic problem for Israel.  Moreover, as I have demonstrated many times, the BDS Movement is not about settlements, it is about a refusal to recognize Israel’s right to exist.

Second, unless the U.S. abandons Israel at the Security Council (a concern I have had for years, but one that would spell complete political death for the Democratic Party if the Obama administration went there), the U.N. is not a real threat to Israel. No amount of U.N. Committee denunciations or General Assembly Resolutions can seriously damage Israel — after all, the U.N. General Assembly in 1975 declared Zionism is Racism, yet Israel survived. While increased U.N. non-binding and unenforceable action is not a good thing, and should be resisted, it is not a strategic threat.

No, the most serious threat is the European Union, which has lost its way economically and politically.

This is a diplomatic problem, not a boycott problem. But it is a diplomatic problem that cannot be solved by giving into the absolutist demands recently announced (again) by Mahmoud Abbas:  Refusal to recognize Israel as a Jewish State; complete control of all of East Jerusalem previously occupied by Jordan; unfettered right of return to Israel of all Arab refugees and their descendants; no security guarantees that would allow Israel to prevent the West Bank from turning into an Iranian missile base like Gaza.

The choice is not between settlements and peace, as Gaza demonstrated.

Whether the European Union goes through with threats of some sort of governmental boycott will depend on a number of factors, including how strong the U.S. pushes back. Congress, in particular, could play a very important role is protecting Israel from such boycott, much as anti-boycott legislation seriously mitigated the Arab League boycott.

The boycotts, whether private or instigated through the EU, are part of the endless war.

But panic is not the solution.

If anything, panic has lead the Palestinians to believe they can achieve through pressure things that put Israel’s existence in peril. ‘Palestinians to reject Kerry peace plan, launch diplomatic war on Israel’:

The Palestinian Authority is currently setting up teams to wage diplomatic war against Israel in “every conceivable” forum, including pushing for boycotts of Israel and seeking legal rulings against Israel via international courts in The Hague, Israel’s Channel 2 news reported Friday night.

Unless Kerry significantly changes the current formulation of his proposals, the report said, the Palestinians will reject his overtures, confident that much of the international community will consider them to be the injured party and hold Israel responsible for the failure of peace efforts.

This will be another opportunity missed by the Palestinians, as they could most of what they want currently through negotiations. But they can’t get what they really want, which is the end of Israel as a Jewish state.

Until the Palestinians accept Israel as the Jewish homeland within secure and defensible borders, there is no choice for Israel to make.

But here’s a fast way to tell why many, many people should want Israel to stay and to be strong. Seven little words:

“Non-Muslim peoples have the right to sovereignty.”

The European Union is only a temporary problem. As soon as the Arabs finish taking over Europe it will be no different than any other closed and biased muslim market/souk
.

The only reason Obama hasn’t completely abandoned Israel is he knows his entire party would desert him. Not his base, which also subscribes to his own secret anti-Israel attitude (as evidenced by his friends and mentors), but the bulk of the Democratic Party. Even most of them who aren’t fans of Israel understand the American people feel a strong bond of kinship with the Israelis and will never countenance official emnity.

But it does tend to inform his islamophilic world view, which leads, in areas like negotiations with Iran, to the same end effect.

The Paleos will never acknowledge Israel as a Jewish state. The Paleos would have to live in a civilized fashion, govern themselves and quit living off UN, US and EU welfare