In totalitarian societies, holidays serve the interest of the State

In totalitarian societies, holidays serve the interest of the State

Glad we don’t live in such a place. 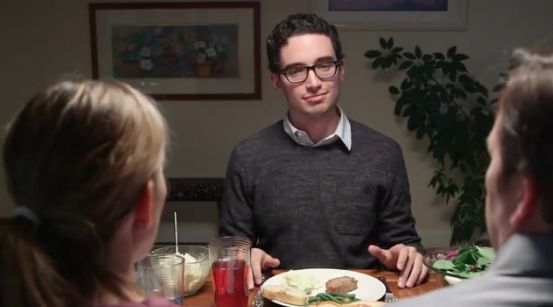 Democrats have prepared a guide to confronting Republican relatives at Thanksgiving:

#Thanksgiving is tomorrow. If you have Rush Limbaugh listening relatives, this is for you —> http://t.co/EpU0ylVhAZ

For those Democrats who are too dumb to remember the talking points, they even have a cheat sheet (h/t Noah Rothman):

Got a crazy Tea Party cousin? We'll text you a Thanksgiving Cheat Sheet with the facts you need. Get yours here –> http://t.co/JIrgCiR2PS

And what a fantastic idea; nothing says, “this would make for interesting dinner conversation” quite like debating Obamacare.  After all, over the past month, signing up for Obamacare has really put people in the holiday spirit.

Democrats are just doing what the leader of the Party wants:

Parents: Turkey isn't the only thing to talk about at Thanksgiving this year. #GetTalking pic.twitter.com/f3mpGL3f9U

To get the warm-fuzzies going, a month ago BarackObama.com introduced the idea of “it’s time to have the talk” in a video on its website.

The video begins innocently enough, with a twenty-something answering a phone call from his parents.

“We have something really important to talk about,” his parents say in a serious tone.

And it only gets weirder.

As the young man drives to his parent’s house in a gas-guzzling SUV, he ponders what his parents could want to talk to him about.

A number of possible conversation topics are presented. In what must have been a desperate attempt to appear in-touch with younger voters, they even include bad pop culture references to things like Daft Punk and Harry Potter.

As the family sits down to eat a holiday meal, the anticipation is high. So, what could the parents want to talk to their son about?

“We know you don’t have health insurance- but its time to get covered,” the dad tells his son.

At the end of the video, the son agrees to sign up.

Personally, I would like to thank BarackObama.com for this warm holiday tale- it really embodies the holiday spirit.

And I’m sure that it will (not) go down as a classic.

How long before they set up a website to report your relatives? Oh wait:

We've launched a new way to track and respond to attacks against President Obama: #AttackWatch. Check it out: http://t.co/ruYN3kA

And why, oh why, does this campaign make me think of Bill Ayers?

If you are someone like me who is NOT drinking the Kool-Aid this Thanksgiving here is what a real community organizer said:

I guess it shouldn’t come as much of a surprise – a creepy idea (complete with creepy video) from a creepy political party, headed by a creepy liar-in-chief and his creepy administration ~

Thanksgiving is about…wait for it…

giving thanks for all we are blessed to enjoy. Which is immense.

Family, high among those blessings. It is not a time or place for a Pres. ScamWOW sales pitch, regardless of who is selling the crappy insurance, any more than it is a place for your used car selling relatives to put the arm on you for the red hot deal they have on a Trabant.

Family is another concept that the left works hard to destroy, and they have made a lot of progress.

At some point even Democrats may become disgusted with these tactics. I am eagerly waiting for feedback on how this pans out. My guess is the rabid left will follow their leader’s advice, while their right leaning relations/friends will not want to discuss this topic at Thanksgiving. So they will chalk it up as a win and declare they left the opposition speechless.

Don’t hesitate to use the word “Communist” when talking to your Democrat relatives about Democrats and their policies. Tell thm it’s accuracy in action.

Contrast that to the Very Stasi Christmas you can look forward to from the Collective and Pres. ScamWOW.

Is this a joke?

No. They are deadly serious.

Don’t forget to badger your loved ones into accepting civilian disarmament this holiday season, either.

Why would anyone bring up Obamacare at Thanksgiving? I’d be worried that someone has had their insurance cancelled by it and reminding them would ruin their day.