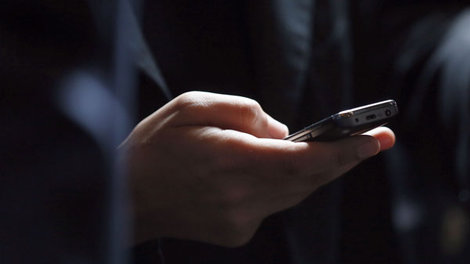 Authorities investigating a shooting on a San Francisco train that killed a college student last month say surveillance footage shows that people were so engrossed in their phones they didn’t even notice the gunman flashing the weapon.

From the Associated Press (via Yahoo):

A man flashed a gun several times on a crowded commuter train in San Francisco, but passengers were so absorbed in their phones and tablets they didn’t notice until he randomly shot and killed a university student, authorities said.

Security video footage showed the gunman pull out the .45-caliber pistol, raise it and point it across the aisle before putting it back against his side, authorities told the San Francisco Chronicle (http://bit.ly/1crPYQc ) in a story on Monday.

The man drew the gun several more times and once wiped his nose with the hand holding the weapon.

“These weren’t concealed movements — the gun is very clear,” District Attorney George Gascon said. “These people are in very close proximity with him, and nobody sees this. They’re just so engrossed, texting and reading and whatnot. They’re completely oblivious of their surroundings.”

Authorities declined a request by The Associated Press for the surveillance footage, citing an ongoing investigation.

It’s a case that concerns authorities on a more general level, according to the San Francisco Chronicle.

Gascón said what happened on the light-rail car speaks to a larger dilemma of the digital age. As glowing screens dominate the public sphere, people seem more and more inclined to become engrossed, whether they are in a car or a train or are strolling through an intersection.

Authorities also worry about incidents in which distracted cell phone users face other dangers, even in something as common as crossing the street. The same article mentions:

Gascón pointed to an incident in August 2011 when the driver of a Muni bus slammed into a pedestrian in a crosswalk, killing her.

The driver, whose attorney said he was lost at the time of the crash, was charged with misdemeanor vehicular manslaughter. Gascón said surveillance video showed that though the 23-year-old victim had the right-of-way, she didn’t once look up from her phone as she walked into the road.

“She never saw it coming,” he said. “Had she looked up just once, she would be alive today.”

However, smartphone video has also been instrumental in helping to solve some crimes, so authorities are careful to strike a balance in that discussion, points out the SF Chronicle.

“I’m not going to say we don’t appreciate the cell phone videos that we have gotten on so many occasions that have helped us solve crimes,” [San Francisco Police Chief Greg] Suhr said. “But it makes people so incredibly vulnerable to crime. And the inattention, which creates this tremendous vulnerability to people, is just something that’s so easily corrected.”

I think the police may have a point.  Technology is great, but moderation is key.

The SF Chronicle article brought to mind the viral video I featured in a prior post (the post itself was actually about those so-called “internet addiction” centers popping up across the country). And it more seriously drove home the point that it really shouldn’t be so difficult to pay a little more attention to people and our surroundings and a little less attention to our smartphones.

Say it with me…

I would say it with you, but I am rather conflicted ( or is that conflated ) with this thread ( or possibly even convicted by it ), so I am going to have to recuse myself. 😉

I don’t have a smartphone; just a regular cell phone. It costs me some serious geek-cred (who ever heard of a technology geek without tech toys?), but I have my reasons for deliberately not getting one.

This is one of them.

I’m not going to be one of those people who loses track of the world because they’re totally focused on an eye-strain-inducing screen.

I had wondered if it was truly not seeing or if they ignored on purpose.

Exactly. You’re trapped in a train, unless you’re a resident of a county far away you can’t carry legally … just what are you supposed to do, especially if you’re not in grappling range of the perp?

The state, in its infinite wisdom, has assigned its subjects the role of prey, and now one of its organs is griping about some of them fulfilling it?

Just no pleasing liberals, I guess.

True, you’re in a situation where if you do *anything*, you will gain the attention of an armed nutcase. Then after the shooting happened, if you admit to having seen anything *before* the shooting, you open yourself up to being dragged in front of a court at your own expense for days, possibly even targeted by relatives of the nutcase or even sued for not doing anything.

Thank you modern liberals for ensuring we are all disarmed sheep, cowed to the lash of the lawsuit.

Nary a day passes I’m not stuck behind somebody on a phone not paying attention to the situation at hand, whether in traffic, grocery store, lap dance line, etc. I think I’ll get one of those obnoxious handheld airhorns to wake folks up. It’s ok, don’t worry, I carry concealed.

There have always been people who could get run over by the marching band and, sprawled amidst the tubas and bass drums, ask, “Man, what just happened?”
Now we have converted most of the population under, say, fifty into marching band obstacles.

And if they had noticed him, then what? A car load of smartphones is no match for a 45.

Is concealed carry even legal on BART?

Good gravy, man, it’s San Francisco. Of course not! Only criminals can carry concealed in SF!

(Honest, I’m being a touch sarcastic.)