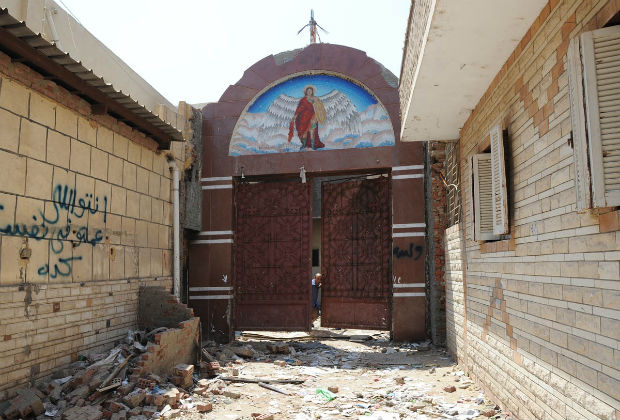 I have been following the disturbing news from Egypt closely; while it was hoped that a new president and a ban on the Muslim Brotherhood might stem more violence against its Coptic Christians, it looks like that is not to be:

The wedding party stood outside the church, eagerly awaiting the ceremonious arrival of the bride. Instead, drive-by shooters killed four, including two children and the groom’s mother, and injured 18.

Beyond its poignancy, the attack in Cairo’s industrial neighborhood of Warraq was significant for being one of the first to target Egypt’s Christians specifically, versus the now-common attacks on their church buildings.

“Since the revolution, this is the first instance Coptic people were targeted randomly in a church, with weapons,” said Mina Magdy, general coordinator for the Maspero Youth Union, a mostly Coptic revolutionary group formed in response to church burnings in 2011 after the fall of President Hosni Mubarak.

Interestingly, Kentucky Senator Rand Paul spoke about the issue of Muslim violence against Christians at a Value Voters summit earlier this month:

“Christians are being attacked around the world, but you won’t hear much about it on the evening news because the answer’s not convenient,” Paul continued. “It doesn’t fit the narrative we have been told about radical Islam. The president tries to gloss over who’s attacking and killing Christians. The media describes the killings as sectarian. But the truth is, a worldwide war on Christians is being waged by a fanatical element of Islam….”

“American tax dollars should never be spent to prop up a war on Christianity,” Paul continued. “But that’s what’s happening now across the globe. As Christians, we should take a stand and fight against any of your tax dollars funding any persecution of Christians.”

Meanwhile, the nightime curfew imposed in Cairo and 13 other governorates in the wake of the latest round of civil unrest that started this August is set to stay in place through November. Also, Egypt’s constitutional amendment committee members will begin voting to approve uncontroversial articles this Sunday; the final draft of the amended constitution is expected to be ready by early December.

Amr Moussa, head of Egypt’s constitution committee, said that the 50-member body will begin voting on largely “agreed upon” articles on Sunday.

Moussa said in a statement published on his official Facebook page on Friday night that members will cast their votes on uncontroversial constitutional draft articles already prepared by the subcommittees. He added that constitutional articles circulating in online media and described as “final formulations” produced by the committee are “inaccurate… and do not represent the truth.”

Hopefully, the new government will take more steps to better protect their religious minorities as they move forward with their amendments.

The elephant in the room is the Hamas Covenant, and what that document discloses about the Muslim Brotherhood and Hamas.

This document is every bit as filthy as Mein Kampf, and it is active. It includes, among many other choice bits, an agreement to engage in an advertising campaign to convince Muslims that they have an individual religious duty to murder every Jew on the face of the earth, and reconquer every square inch of land ever held by a “Muslim” regime.

President Barack Obama is in a unique position as the first United States President who is perceived by vast numbers in the Muslim world as a Muslim. That is because his acknowledged father was a Muslim, and under Islam, the religion of the father is controlling, regardless of what the offspring believe. This is wholly different from the American perspective, but the American perspective is irrelevant to Muslims outside this country.

Barack Obama could shake up the entire Muslim world, in a very positive way, simply by declaring that the Hamas Covenant (only one of several terrorist organization documents of similar import) is not in accordance with the highest principles of Islam, and is unhelpful to the peace process.

The statement I have formulated is mild, because in fact the Hamas Covenant is easily recognized as blasphemy by any person of good will, and by all decent Muslims, according to their own authoritative statement, A Common Word between Us and You.

Unfortunately, Barack Obama has left the power of his position unused, so that the people of Egypt have concluded that he is a supporter of terrorism.

The attacks on Christians are not carried out by radical Muslim elements. They are carried out by Muslims. Period. I wish Rand Paul did not feel compelled to mouth that lie. Historically, Islam wages war on everyone it can. That is the nature of the beast.

The only solution us to arm the Christians. Better to fire back in self defense than to be a sitting duck. They’re killing us all over the world, so they can’t do worse if we fire back.

Meanwhile, Muslims in the USA live in peace, using lawfare against us to islamicize our country so they can start slaughtering us as they’re doing to us in Israel and Egypt. Deport them.

When BHO said he would radically transform this country, he left unstated his goal for transforming the world. However, his many international actions have lead many to presume that BHO is incompetent, which is wrong; his goals are being realized.

BHO is simply a committed Socialist, with a goal of reducing the influence of the USA while raising up that of our foreign opponents. He seems unwilling to publicly admit his specific goals yet the reactions to his foreign policy actions are now very clear.

Praying for a benign outcome from current world events seems to be a stretch well beyond reasonable expectations. So, those of us that can prepare for a rocky future should start doing so.