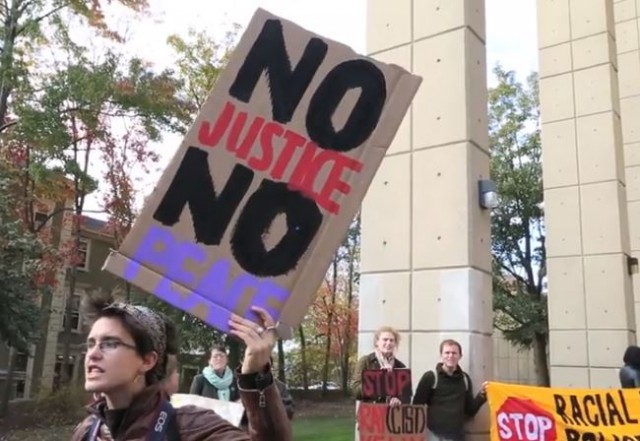 This is a follow up to our post last night, Brown U. students shout down Ray Kelly.

The Brown Political Review has produced an excellent video (embedded at bottom of post) with footage both inside and outside the auditorium as Kelly was shouted down, and interviews with students and administrators.

Is is quite clear that there was an organized effort to shut down the Kelly speech, and that many of the people shouting were not even students.  Student Emily Kassie, who produced the video (speaking for herself, not BPR), told me via email:

The protestors were a mix of Providence community members and Brown students. There is a moment in the video where people are asked to raise their hands if they want to hear Kelly speak. About half the room raised their hands.

The woman in the image below (since removed) related how she was called a White Supremacist for wanting to attend the lecture (at 9:30):

I got called a White Supremacist when I tried to go inside, cause I told a man near the front door that I wanted to hear what Kelly had to say.  And I think that’s pretty ridiculous. I think the idea that suppressing another person’s right to free speech equals exercising your free speech is completely wrong.

In a press release, the BPR described what went on inside the auditorium:

Kelly had time only to thank the event organizers, before a group of students and community members in the audience rose simultaneously to read prepared remarks. “Asking tough questions is not enough!” they read together, fists raised in unison.

Individual audience members then rose sporadically to rebuke Kelly, who stood silently at the podium. “You’re violating our rights! And you expect us to be civil towards you?” said one man, prompting cheers from the crowd.

“Let the man speak!” one audience member was heard shouting. An event organizer approached a protestor and asked him to “Please stop shouting.” The man refused, and for the next fifteen minutes, over a dozen onlookers in the crowd rose to condemn Kelly, who stood at the podium in silence.

“Enough is enough!” shouted one woman. “Ray Ray go away!” shouted another.

Event organizers briefly took the podium to restore order, but their appeal was unsuccessful. The event was then cut short, after approximately 25 minutes of protests.

I don’t think this is the last we’ll be hearing about this event, the protest, Ray Kelly or racial profiling. The Brown Campus is more politically charged then I’ve ever seen it. We’ve had two weeks of students urging and protesting the university to divest in coal, and yesterday’s event has added more fuel to the fire (although they are two very separate events.) It is important to note that campus is split on the shut down of Ray Kelly’s speech–some celebrating their victory, and others disappointed that they were not able to engage in an active dialogue with him, and embarrassed by the actions of their peers. President Paxson has already sent out an email to the community expressing her disappointment and I don’t expect it will stop there. There next few weeks will be heavy with community meetings and talks, and hopefully we will create a constructive space for open-dialogue.

The Nazis were the ones suppressing free speech. Who are the “supremacists” here?

Misplaced anger and misdirected activism. These kids have no idea why they are unhappy with the government.

All of this is the university’s fault.

How weak the idea that cannot bear comparison to a differing idea. How weak the believer who will not tolerate the mere speaking out of a differing belief. How evil the faculty that co-opts inexperienced, impressionable minds for its own political & cultural agenda.

They should have sent Tom Selleck instead.

It is easy to whip very young, stupid people into a frenzy of self-righteousness. All you have to do is lie to them.

This did not start with the kiddies. There’s an authority figure involved, here. Look for the Miss Jean Brodie connected with the college. There will be one. It is highly unlikely that someone outside the campus could both bring people in and stir up students.

>>”Look for the Miss Jean Brodie connected with the college. There will be one.”

University students urging the school to divest in coal? Unless they receive their electric from nuclear, I say take Brown University off the electric grid from the coal-fired plants and let us hear them whine. Brown ought to go with solar and wind so the little hypocrites can feel good about themselves.

It’s the inevitable result of turning over the academy to the hard left for 40 years, subsidized by tax money.

Had institutions been required to fund their own operations sans subsidies, they could not have competed by steering young people towards socialism, and the offending faculty would have been purged long ago.

College aged people need to learn about the 1st Amendment in the context of rights of all people. Instead, they have been instilled with a sense of entitlement, that “their” “truth” is as valid as any objective fact and that dissent from politically correct dogma is offensive. That’s not why we send them to college, and we need to stop paying for it.

>>”And you expect us to be civil towards you?”

Remember that. It’s Leftism in a nutshell. They’re exempt from civility. It’s not only that they’re special (which they are, of course), but that you’re contemptible. That you could even hold a contrary position subjects you to special opprobrium as it relieves them of upholding any of your stupid bourgeous expectations or standards of behavior.

So what’s so wrong about being called white supremacists?
Facts don’t lie: the white race introduced civilization to the rest of the world, after having been civilized and moralized by the Jewish race, also white, I might add.

This must be a terrible country when all these browns, blacks and yellows are fighting tooth and nail to enter the USA. Why, were I them I would flee this country post-haste.
Along with all those self-hating white folks.

And we all know that will never happen.

Brown is a private university. It’s funded almost entirely by the very high tuition and fees paid by students from wealthy families ($55,016/year) and donations from wealthy alumni. It has a $2.5 billion endowment.

There are many other expensive private colleges and universities overrun with leftists: Duke, Columbia, Oberlin. Indeed it is hard to find an “elite” private college that isn’t leftist, unless it’s an explicitly conservative institution like Grove City, Liberty, Ave Maria, or Hillsdale. (Conquest’s Second Law: any institution which is not explicitly right-wing becomes left-wing over time.)

But the bizarre correlation between wealth and leftism has gotten very strong lately. Nearly all the wealthiest communities in America are left-dominated.