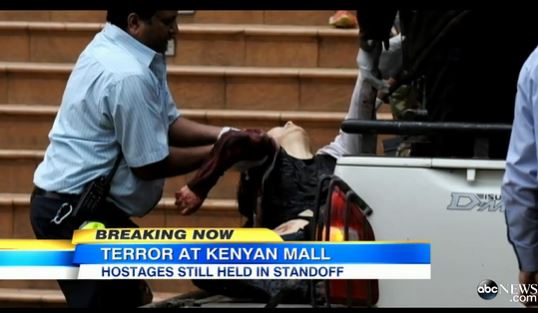 There has been an attack by gunmen at an upscale Nairobi mall, killing at least 30 and wounding countless more. Hostages have also been taken.

An al Qaeda-linked Somalian-based group has claimed the credit—or the blame, depending on your outlook.

A mall attack on this scale has long been expected, since it would be relatively easy to get guns into the vast majority of such facilities and there is a huge concentration of unarmed potential victims milling about, including children who are perfect terrorist fodder. This particular mall catered to expatriates and the wealthy, all the more reason for terrorists to consider it a target-rich environment.

The CNN article just linked is a long one with many details, including the fact that the deed was most likely perpetrated by Islamic terrorists. But it omits several items found in this article at Fox, such as the fact that the mall was owned by an Israeli company, a special children’s day was being hosted there, and the terrorist group al-Shabab (the same one that had said the attack was their handiwork) had sworn in 2011 to attack Nairobi in retaliation for Kenya’s sending troops to Somalia to fight Islamic insurgents.

Elijah Kamau, who was at the mall at the time of the midday attack, said that the gunmen made a declaration that non-Muslims would be targeted.

“The gunmen told Muslims to stand up and leave. They were safe, and non-Muslims would be targeted,” he said.

The CNN article, by the way, appears to disagree, saying the gunmen fired “indiscriminately.” But the Daily Mail also reports that at least one of the terrorists explicitly spared Muslims, asking people to recite a Muslim prayer in order to prove their religious affiliation.

Reports seem to agree that the attack began just outside the mall and then moved inside, and according to Fox there were armed police on the spot even at the outset. But there were multiple armed perpetrators; up to ten have been reported, and they also detonated grenades. They may have outnumbered the initial police on the scene, although backup arrived in the form of members of the military and/or more police, who then surrounded the mall.

Anybody stupid enough to be in a muzzie country should not be surprised to meet their maker sooner than hoped.

And now we know why obastard chooses to pass himself off as 100% American.

I certainly wouldn’t want to be Kenyan.

Kenya is a Christian nation.

Lemme seeeeeeee… I’m gonna bet $12-Zillion Bucks that O’Dumbo and his Loathsome Sec’y of State will get all stern and concerned for about 7-finger wagging seconds. You know,”Unbelievably brief”!!

What I want to know is….

Where’s the video to blame for this?

“The Religion of Pieces”

When I lived in Egypt, the malls had armed guards and patrons passed through metal detectors and put their bags through an X-ray machine, just like airports. And this was under Mubarak. However, a squad of ten armed terrorists could have easily broken through that security.

Somalies. Who get their ammunition from the saud’s. (Insurance companies have been making it tough for the Somalies to be pirates at sea.)