Here’s a little piece of advice for those in trouble with the law:  If you don’t want to be arrested, stay off social media.

You may recall that on July 28th, riots broke out in Huntington Beach, California following the Vans U.S. Open of Surfing competition.  The melee resulted in property damage to stores in the area, small fires being set ablaze, toppling of port-a-potties, looting and fights in the streets and damage to police cars.

As is common now in the age of social media, photos and videos of the chaos went viral online, and police promised to take advantage of the postings to help make arrests in their followup investigations.

When the Huntington Beach Police Department posted a series of photos to its Facebook page on August 7th, asking for assistance in identifying some of the suspects involved in some of that day’s activities, Luis Rodriguez was the feature in photo #15.

Apparently the temptation was too much for Rodriguez to resist.  He “liked” the photo of himself, a mock-worthy move that wasn’t lost on viewers of the post.  That “like” led to Rodriguez’s arrest, according to an updated statement today on the Huntington Police Department’s Facebook page.

August 16, Luis Enrique Rodriguez, 18 years old of Anaheim, was arrested on our warrant for his arrest by the Anaheim Police Department. HBPD had obtained a warrant for his arrest for vandalism after our investigation showed him writing “f*ck the pigs” on the sides of police cars at the scene. Mr. Rodriguez, apparently proud of his actions, “liked” the Huntington Beach Police Department’s picture #15 and shared it with his friends, which was noticed by numerous fans of our Facebook page and a series of tips leading to his identification. 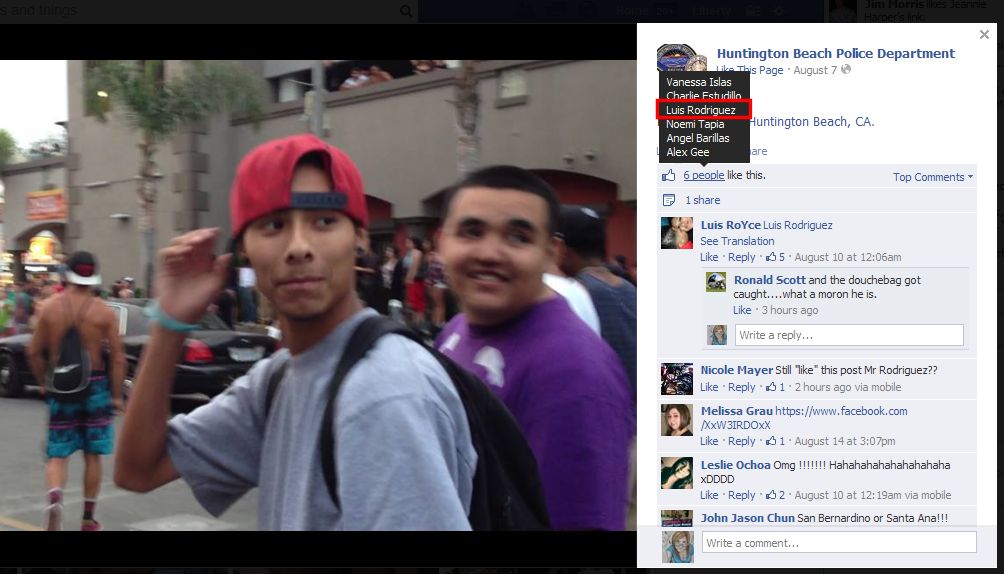 Another suspect from the July incident was also reportedly busy tweeting about his interactions with police recently.

The Good News: You helped bring a criminal to justice.

The Bad News: There’s no reward for being dumb.

Stupid is as stupid does.

No, but some people are making great strides in perfecting it.

I wonder what the Darwin award analogy is for Criminals who take themselves off the street? This guy is a winner for sure!

Mandy, I’m a 15 year vet police officer and I’ve often joked with attorneys “Don’t knock stupid people. Without them, we’d all be out of a job!” :<)

After serving on a grand jury, I find that statement so true.

On the old ’60s “Batman” show, Robin would be amazed by the way some criminals managed to screw up and get caught.

Batman would tell him, “If crooks were smart, they wouldn’t be crooks!”

A great example of why a generic cop slang term for street criminals is “goofs”.

[…] wonder how much he “likes” that post now. Suspect in Huntington Beach riots arrested after “liking” his photo on police dept&rsquo… Keep yo business off of Facebook Church Choir’s Anti-Facebook Gospel Song Goes Viral on […]

Ah, narcissism. It makes it possible for you to stab yourself in the back.

Probably one of those low IQ immigrants that Jason Richwine exposed.