Note: Breitbart News notes in an interview with this activist that she was “an anti-Zimmerman demonstrator attempting to use sarcasm to prove her point,” and not an infiltrator as reported on the source blog.

Kristinn Taylor brought us this gem via Jim Hoft’s Gateway Pundit blog this week.  I’ll try to sum it up quickly here for your Saturday night, short story style.

A far left activist infiltrated a rally of people gathered in support of the Zimmerman verdict in Houston on Sunday.

She stood by the demonstrators and held up a really nasty (and stupid) sign.

Turns out a news photographer (from AP) snapped a photo of her (being stupid).  The Daily News, for one, picked up the photo and featured it with the noted caption beneath it.  The Houston Chronicle also quoted her in its coverage.

She was then outed as left-wing activist Renee Vaughan from Austin (aka Michele Renee).

Then she apologized on Facebook. When she got caught. 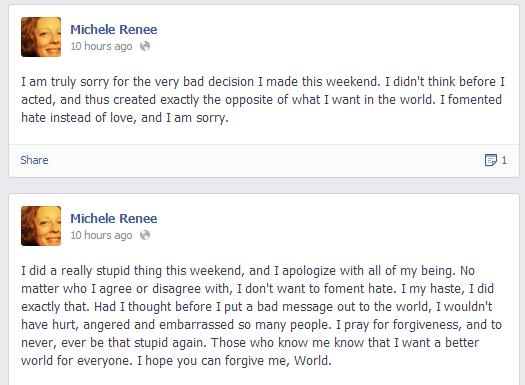 And her employer, Texas Campaign for the Environment, apologized and denounced her behavior, noting that her actions were not connected to the organization. (Read the whole series of events at Gateway Pundit for details and to get the full effect).

And then the Daily News removed the photo from its article and issued this correction at the bottom.

An earlier version story contained an error that said that a pro-Zimmerman protester held a sign saying, “We’re racist & proud” and shouted that slogan at pro-Trayvon Martin protesters. The woman displayed the sign in front of the pro-Zimmerman group, in an apparent attempt to mock them. It is unclear whether the woman, identified by the Houston Chronicle as Renee Vaughan, was involved with either group.

15 minutes of stupidity fame. Now immortalized on the interwebz.

Of course, this story was more like a sequel when you think about it…

“STUPID IS AS STUPID DOES”

I have to admit that the last six years have turned me into somewhat of a racist. I’ve always believed that people of all skin colors and ethnicities were equal before the law, but when I see the U.S. attorney general letting “his people” off the hook while prosecuting “white hispanics”, it’s clear that he doesn’t share MLK’s idea of judging people on the content of their character.

When I see every major U.S. city run by black people falling into decay and destruction and corruption like Detroit, I have to wonder if race isn’t a factor.

yes, i’m thinking that too…all the evil racists “running” the country and their partners in crime (MSM, black civil rights “leaders”, hollywood )how can it not affect us this way! but then again, i hate evil and assholes no matter what color the come in

That’s just someone from Austin doing their thing… Being weird and proud of it. Austin is a hotbed of ultra liberalism second to none.

Either one sounds about right!

“…an apparent attempt to mock them.”

Not quite. When one tries to make it look like one’s offenses (in this case, race-baiting and bigotry) were actually committed by someone else (a “pro-Zimmerman group”), that’s called “framing”, not “mocking”.

That doesn’t mean that this woman is stupid. It means that she’s evil.

Of course this was a pretty simple case, a very straightforward con and probably a very common one. But she managed to get caught. THAT makes her stupid.

Where was she standing at the time she was being photographed? Last I read of this at Breitbart/Gateway Pundit, she was standing by pro-Trayvon protestors, not the pro-Zimmerman ones.

Either way, what she was doing was utterly foolish. So was she actually setting out to be taken as a pro-Zimmerman protester, or just engaging in a poorly thought-out bid for attention? Does the culpability for the hoax fall purely upon the media (D), or, assuming she A) may have known how they would run with it, and B) that she was in fact standing by pro-Trayvon protesters at the time, did she do it knowing she could securely amongst he fellow travelers and still be portrayed as a pro-Zimmerman protester? (Considering that the real pro-Zimmerman protesters would have possibly have taken her sign and booted her out if she had tried to mix in amongst them.)

The only thing I’m certain about this story, at this time, is that it goes to show how people who lead confused, unquestioning, and self-deceptive lives have a hell of a way of spreading confusion and chaos. But, ho ho, hey hey, that’s the statist’s way.

She should be sued. And fired.

Rags
Defamation of Character sounds right. A Class Action suit might do it.
Fired for bringing adverse publicity to her employment place would work
She apologized so as to avoid these suits…but the evil deed was done.

Whom did she defame? That’s a term which has a pretty specific meaning in law.

Whether her employer wants to dump her is up to them, but the “class action lawsuit” idea sounds a little nutty — and extreme — to me.

She actually apologized – color me surprised. It wasn’t one of those ‘if someone found it offensive’ dodges, either…

But, cameras and sound recorders are ubiquitous, now. It’s getting harder to engage in “street theater” and have somebody else take the blame.

If she really means, as she stated “I didn’t think it put a bad message out to the world’, then the Texas Campaign for the Environment needs to fire her on the grounds of ‘being too fucking stupid to work here’.

What would the MSM say if Tea Partyers infiltrated a Leftist demo with signs saying “30,000,000 die-hard American Capitalists need to be liquidated!” or “Follow the line of Mao and Pol Pot” and waved posters of Stalin.

You are committing the same cardinal error as are people who mouth the Zimmerman myths and lies.

This is a MEDIA creation, front to back.

She did NOT infiltrate any damn thing. She stood with the Zimmerman-haters. Not the Zimmerman supporters. There is VIDEO, and an interview with a Breitian reporter.

I think a lot of people didn’t see the interview with the only person on the scene who bothered to talk to her, Breitbart’s Brandon Darby.

She wasn’t role-playing, she wasn’t pretending to be a conservative, she wasn’t being dishonest, she was remarkably up-front about what she was doing there and what her point was. It was a pretty stupid sign, and the point she was thinking she was making was equally stupid, but she wasn’t disingenuous about her motives.

It’s just a shame no-one else took the time to actually talk to her, but instead ran with their own narratives.

We caught that a couple of days ago, and had a lot of fun with it:

i don’t buy her “apology” at all…the only thing she’s sorry about is getting caught!

Dear Michele,
You think you fomented hate and not love for the world by you holding a sign at a rally?
Who is filling your head with such delusions or do you just
tell yourself you are THAT important?.

You want a better world for everyone?
Everyone except anyone who disagrees with you. They should be mocked ( read slandered ) as racist.

I took the time to educate myself about people I know nothing about that being you and your employer, something in your arrogance you did not bother to do about others.

You Michele are a dime a dozen arrogant liberal who is
causing endless harm to this world not by this little stunt
that backfired but by your overall behavior the life you have chosen. While you get paid to parrot so called environmental issues People:

Cannot afford to buy food
Can no longer afford their home due to increased taxation
Cannot afford to heat/cool their homes
Die in wars caused by hardships created by your actions
Are forced to sell their farms, ranches etc because their
property rights no longer exist.

There are all too many other examples of the damage you are doing by your overall behavior.

Please stop trying to save the world you are ruining it.

A far left activist infiltrated a rally of people gathered in support of the Zimmerman verdict in Houston on Sunday.

Wrong. She did not infiltrate the pro-Zimmerman rally. She was clearly at the anti-Zimmerman rally, and made no pretense otherwise. The idea that she was, or was pretending to be, pro-Z is exactly like the “plastic turkey” story — reporters who weren’t there misunderstood and distorted the reports they read, imposing and inserting their own assumptions into the story.

That is correct. She was never deceptive in the least about what she was doing or where here sympathies lie.

Breitbart even taped her. WE have to read and absorb information more carefully, too, lest we act like our Collectivist enemies.

She even states she was ‘being sarcastic’. If that is her idea of being sarcastic perhaps she should confer with Sheldon Cooper of The Big Bang fame. I think even he would consider her attempt at sarcasm was ill-conceived and poorly executed.

Which is why she said so, publicly.

I give her full marks for integrity, which the media does not have.

Integrity would involve directly contacting those media outlets who still have not corrected the record and demanding corrections as publicly and prominently as the initial reports.

Starting with the photographer who ‘failed’ to exercise any diligence in finding the truth of the matter.

Dude, she did NOT create those reports. I see no duty to have them recalled on her part.

I can’t see Zimmerman contacting each media outlet to vacantly insist they correct what THEY did.

Really! Sometimes we have to acknowledge “good enough”, and pat people on the head for doing anything APPROACHING the right thing.

Why on earth should she go out of her way to correct other people’s misreporting?

I swear, I thought they could fly !

Interestingly, she is no longer listed in the Staff profiles at the Texas Campaign for the Environment…

Racism is ignorance of the universal nature of humanity. Those who exploit racism for their own gain are not ignorant, they are evil.

She stands with the Zimmerman supporters with a “We’re racists & proud” sign, and thinks it’s going to do anything but create hate?

Has she taken a recent blow to the head?

NO! How many times do you have to hear it, she did not stand with the Zimmerman supporters. That is a complete fabrication, just like Bush’s infamous “plastic turkey”, and repeating it won’t make it truer.