And he’s doing so through photos. 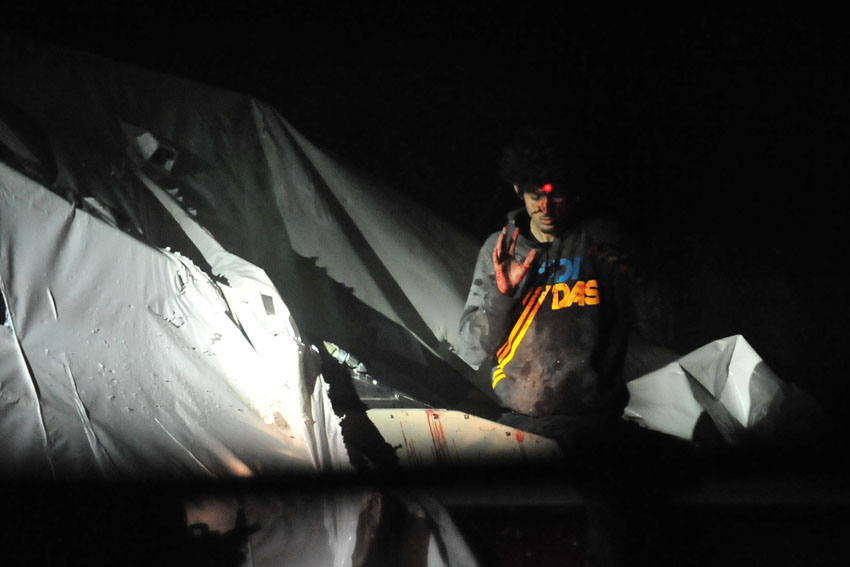 Sgt. Sean Murphy, a tactical photographer with the Massachusetts State Police who has photographed the funerals of many officers killed in the line of duty, is furious with the magazine [Rolling Stone]. Murphy, who also acts a liaison to the families of fallen officers, is so angered by the cover—which he says is both dangerous and insulting to the victims of the bombings—that he feels the need to counter the message that it conveys.

We all remember the day of the manhunt, when Governor Patrick and law enforcement officials decided, in essence, to shut Boston down. Throughout it all, Murphy, alone in his assignment behind police lines, was capturing images of the day’s events—the high-level conferences, the mobilization of law enforcement, and the dramatic capture. Because the whole thing was televised live, everyone knows that the day ended with a wounded Tsarnaev being taken into custody. What few people have seen, because Murphy’s photos from that day have never been made public before, is the condition Tsarnaev was in at the time of his capture—and, indeed, exactly how he was captured. Murphy wants the world to know that the Tsarnaev in the photos he took that night—defeated and barely alive, with the red dots of sniper rifles lighting up his forehead—is the real face of terrorism, not the handsome, confident young man shown on the magazine cover.

Sgt. Murphy says he’s speaking strictly for himself and not on behalf of the Massachusetts State Police.  But he had some heartfelt words for Boston Magazine about the night the Tsarnaev brothers were hunted down and captured, reminding the public that April 19th “was as real as it gets.”

And with Murphy’s background, he’s seen a lot. Including a lot of pain.  Of the Rolling Stone cover, he described its impact on still grieving families’ wounds.   “There is nothing glamorous in bringing more pain to a grieving family,” he said.

“What Rolling Stone did was wrong,” Murphy said. This guy is evil. This is the real Boston bomber. Not someone fluffed and buffed for the cover of Rolling Stone magazine.”

The editor of Boston Magazine explained to CNN that Sgt. Murphy struggled with the decision to release the photos but had real concerns about the negative impacts of Rolling Stone’s cover.

John Wolfson, Boston Magazine’s editor in chief, said the magazine has hundreds of similar photos and will publish more in its September issue. He said Murphy was “conflicted on some level” about releasing the photos, but “genuinely worried” about how the Rolling Stone cover will affect the victims’ families.

“I think he was also worried that certain impressionable people might be lured to replicate that by the kind of glamorous-looking photo that is on the Rolling Stone cover,” Wolfson told CNN’s “The Situation Room.”

Since the release of the photos though, Murphy is said to have been relieved of his duties pending a review, according to CNN (via WTVR).

Sgt. Sean Murphy told CNN’s Anne Clifford Thursday night that he is on leave and has a hearing next week. Earlier Thursday, a police spokesman said the agency had not authorized the release of photos Murphy took.

Read the whole article at Boston Magazine and check out all of Sgt. Murphy’s photos of “the real Boston bomber.”

Update: Trooper has been suspended.

He’ll be reinstated – no worries from the brotherhood of MA state&local lawmen, spoke with my SF(retired lieutenant)about this.
The suspension is coming from above(Libs in gov’t) you know cause you have to respect even lowlife POS like this scumbag.

Too bad the video of him running his brother over isn’t better definition.

Gotta love the red dot on his head!

I’m sure there are five year-olds who have more sense than the editor at “Rolling Stone”. I’m willing to bet that the majority of people, not only in Boston, but all over the country support what Sean Murphy did.

That red laser dot between his eyes is a good look for him.

Isn’t there a mugshot of this guy yet?

Obama leaves school children unprotected, and when they are again inevitably murdered en masse, Obama uses them as props in his attempt to disarm a public that is not subservient enough (to him). America demands kids be protected, but Obama demands we give up gun rights (or he’ll let more children die in his gun free zones?)

Obama gets his haloed picture on a lot of magazine covers, glamorously praised as a hero. Society also failed Obama (especially black society), but he is fighting for a new Marxist people, as he exalts his supranational dream above his oath of office.

Fire the firemen first strategy so people feel the sequester pain. Usher in “single payer” by torturing people with the destruction of the current private health care (the real plan). Use the IRS to abuse any that dare run for or support a smaller government platform. Open the borders and fight states that attempt enforcement. Obama certainly does believe in “terrorism” from on high. Before “we the people” get feds to live up to their oath of office, we have to yield ground and/or cash to Obama’s regime.

With all the Obama scandals ignored and now the stirring up of racial animus, the media glorification of Obama and Tsarnaev follow the same leftist trend … for me at least. I’m disgusted with both, but you seldom see government workers reveal inside info against Obama. (where are the Benghazi witnesses anyway?)

I was reading the comments below the Boston Magazine article. I had to stop. The morons that are arguing he’s innocent (until proven guilty) just amaze me. Shocking

What? Are you serious? We are to just publicly convict someone? Would you want that, or for your family? He’s an american and there have yet to be any pictures of either of the guys dropping a bag. Not to mention, the FBI shot and killed their friend in Florida (who was unarmed) 7 times, once in the head. Where is his throat wound? there are other pictures from This photographer and clearly, there is no throat wound. So, how did that happen? Why were the police opening fire on a covered boat with an unarmed man inside (who hadn’t been 100% identified)? Wake up

Fen oh reallyyyyy? oh my gosh no words NONE.
Special place in hell……

Sean Murphy you are a good man, may God continue to Bless you.

How was it that the “magazine” was able to take such a picture of the murderer anyway? Where did that come from
and who allowed it?
Why isn’t anyone talking about the creepy ass cracka owner of this rag? ( if it is on tweeter I don’t want to know )
It all makes me barf… nuff said

You are obviously retarded. Have you heard of social media? Instagram, facebook, myspace, twitter, etc. It is a “selfie”. Why aren’t people throwing a fit that Obama was on the cover. ARe you aware of how many innocent women and children deaths Obama is responsible for via bombing? Obama is a Global bomber.

Still want clarification on why his throat wasn’t shot (as reported) when getting out of the boat. When did his throat get cut?

You really think that rolling stone took that picture. The human race is doomed. This goes to show how many people simply believe everything that the hear. Whether it be from our government or the media, who is also in bed with the government and their unconstitutional policies home and abroad. Doesn’t matter if it is Fox or MSNBC, they are all reading off of a teleprompter

And where do you get your news, oh enlightened one? Alex Jones?

Wish this guy was around for the Zimmerman trial.. the media is still running pictures of a fluffed & buffed 7 year old Trayvon.

Where can I make a donation to Sgt Murphys suspension fund. I’m understand why they suspended him but as a retired law enforcement officer I believe we should take care of him for his bravery.

[…] State Police Sgt. Sean Murphy was placed on restricted duty today, after he released photos of the capture of Boston bombing suspect Dzhokhar Tsarnaev to a magazine in protest of the recent Rolling Stone […]