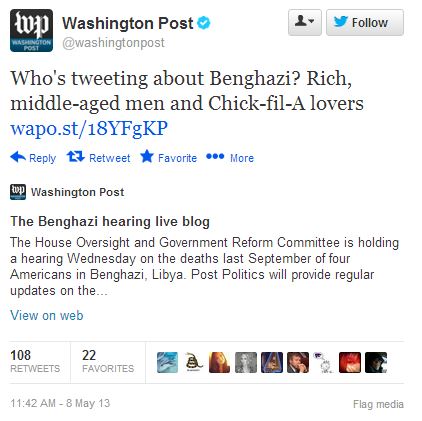 It was the Washington Post’s timing — and the data they selected to highlight — that rubbed many of those watching the Benghazi hearings the wrong way. At the same time the Washington Post tweeted the link to this study, others were tweeting about the content of the hearing:

The post, which the Washington Post published on its live blog of the Benghazi hearings, was published at the same time as another piece focusing on Chairman Darrell Issa’s promoted tweet about the hearing.

The study appears to employ a rather suspect methodology (they leave the details hazy) to make broad generalizations about twitter users based on their “likes.” For example, a twitter user who follows “Chick-fil-A” is assumed by the authors of the study to “eat at Chick-fil-A.” The Washington Post could just as easily have chosen to highlight that 52.2% of those tweeting about Benghazi, according to their results, are Jewish; or that they appear to heavily traffic Starbucks — but what narrative would this serve to further?

At best, the Washington Post’s tweet was ill-timed; at worst, it revealed an agenda they continue pursue while the rest of us ask for truth about Benghazi.

See also: Ace of Spades covers the underlying tactic employed by this sort of “they’re not one of you” narrative.

Update by WAJ — does this qualify at “heh”?

And you would expect what from this fish wrapper?

In the comments….(not here, there)

These are the current readers of The Washington Post.

I just finished reading Ace’s excellent analysis of the meaning of the tweet.

The Washington Post proves its irrelevance with this type of information.

They doth protest too much.

The Washington Post has just sealed its fate: bankruptcy.

The degree of blatantly pro-Obama activism here tells you the left considers these hearings to be a HUGE threat to their grip on power – both the current King and future Queen are at grave risk.

We need to by-pass them. We can only do so by investing in media and in charismatic GOP leadership that won’t cower in a corner or sell us out in fear. We also need to invest in media that will reach dumbasses who vote.

Screw CBS — let’s laugh them out of business.

[…] officials and political representatives. If they decided to actually report the news, instead of insult the news consumers, perhaps the paper’s profits would not be plunging by […]