The persecution and prosecution of Gibson Guitar stands out as a prime example of government overreach, similar to IRS Tea Party targeting.

This video explains the insanity of the raid and ultimate charges — very technical and disputed interpretations of Indian law as to the importation of wood used in the guitars. This had nothing to do with conservation or protection of forests, it had to do with India keeping jobs in India, and insane paperwork requirements in the U.S. The trees would have been cut and the wood used regardless of how Gibson filled out the paperwork:

“The issue here is not illegal logging or some conservation abuse,” Gibson CEO Henry Juszkiewicz told Reuters and other reporters last October. “The laws that are being identified by the Department of Justice have to do with protectionism by the country of origin, keeping work in that country and therefore not allowing something that isn’t that value-added to be exported.”

The Gibson Guitar prosecution smacked of partisan politics (h/t Instapundit), and although it ultimately agreed to a settlement to avoid the costs of defending the case, the absurdity of the charges remained:

On Aug. 24, 2011, the Department of Justice sent armed agents into the Gibson Guitar factor in Memphis “confiscating half a million dollars worth of guitar making material is an alleged violation of environmental standards.”

Gibson CEO Henry Juszkiewicz is a conservative, and his company eventually settled rather than take matters to court.

Nashville-based Gibson agreed to pay a $300,000 penalty, forfeit claims to about $262,000 worth of wood seized by federal agents and contribute $50,000 to theNational Fish and Wildlife Foundation to promote the conservation of protected tree species.

We felt compelled to settle as the costs of proving our case at trial would have cost millions of dollars and taken a very long time to resolve,” CEO Henry Juszkiewicz said in a statement late Monday night….

“We feel that Gibson was inappropriately targeted, and a matter that could have been addressed with a simple contact a caring human being representing the government,” he said in his statement.

Gibson also forfeited an estimated $1 million in wood it purchased.

Civil liberties lawyer Harvey Silverglate wrote about the outrageous gag order the government insisted on as part of the settlemement, Gibson Is Off the Feds’ Hook. Who’s Next?

Did Gibson acquiesce in this settlement solely to end the expense, distraction, danger and agony of a federal criminal prosecution—the usual reasons for shouting “uncle” to Uncle Sam? We will never know. Why? Because federal prosecutors required, as part of the “criminal enforcement agreement,” that Gibson not only “accept[s] and acknowledge[s] responsibility for the conduct” alleged, but also that the company’s “public statements regarding this Agreement will not contradict the statement of facts” set forth in an appendix to the settlement agreement.

Put another way, Gibson is now forbidden to tell the world the whole truth about its conduct and its reasons for settling a case it previously claimed publicly, including in an opinion piece in this newspaper, involved no criminal conduct on its part. In exchange for agreeing to read the government’s script, Gibson regained its ability to conduct business without a federal sword of Damocles dangling over its corporate head.

This naked effort by federal prosecutors to control both news and outcomes, not to mention their own reputations, does not surprise those familiar with the modern federal criminal justice system….

Guess who was a big supporter of this witch hunt against Gibson Guitar.

None other than Massachusetts Congressman and now Senate candidate Ed Markey (h/t Instapundit): 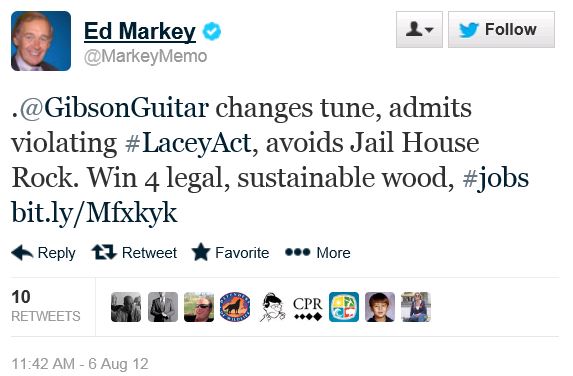 Markey crowed about Gibson Guitar’s capitulation, as if this were some big environmental victory:

“Gibson’s admission of wrongdoing is a win for the Lacey Act, a win for U.S. jobs and a win for consumers who can be assured that illegally trafficked ‘blood wood’ won’t be used to make their guitars,” Rep. Edward J. Markey (D-Mass.) said in a statement.

Markey’s press statement was all on board with the vigorous prosecution and attempted to turn it into a political issue regarding the Tea Party:

“Gibson’s admission of wrongdoing is a win for the Lacey Act, a win for US jobs and a win for consumers who can be assured that illegally trafficked ‘blood wood’ won’t be used to make their guitars,” said Rep. Markey, Ranking Member of the House Natural Resources Committee. “Gibson, the Tea Party and House Republicans attempted to gut the Lacey Act by changing the law in Congress before the case against the guitar maker was resolved. I commend the hard and deliberate work of the Fish and Wildlife Service and the Justice Department to bring this case to a close.

“I would also like to praise Sting, Dave Matthews Band, and Guster, along with the multitude of musicians and other individuals who stood up for the Lacey Act and who pledged to use legal, sustainable musical instruments. Let’s keep the good tunes on good wood coming,” Markey said in a statement.

Ironically, Michelle Obama probably used one of these “blood wood” Gibson Guitars, but I can’t find any record of Markey asking her to give it back.

Ed Markey was the leading politician pushing to punish Gibson Guitar for what at worst was a paperwork error. Markey didn’t appear to understand that this was about protecting jobs overseas, not at home. Markey was all on board with the demonization of a U.S. company for no good reason other than that the government could.

In this time of IRS overreach, there is a lesson here.

Funny, I thought we had to beware of “jack -booted thugs “of the right wing.

And, by confiscating that “blood wood”, these idiots ASSURED more of it had to be harvested.

We have an Environmental Investigation Agency?! With a “valley girl” for a spokesperson? Perfect fit, one supposes–working for the government (doing good), for an investigation agency (more good), with “environmental” in its title (great and wonderful good).

We need a law on top of a law (freedom From Overcriminalization and Unjust Seizures Act) to provide a freedon we already have? Is it any wonder no one knows what they mean?

It’s a microcosm of everything that’s wrong all in one place. Too many over-broad vague laws, too many investigation agencies and investigators, too many overzealous do-gooders, too few consequences for misbehavior, too much government with too few Americans in its employ.

funny, libs complain about us trying to expand our way of life on other countries but love the Lacey Act which makes our citizens enforce laws from another country.

What happened to the “confiscated” wood?

It may be worse. Gibson’s main competitor Martin contributes to Democrats and is tight with the lefty folksinger-songwriter crowd. One might wonder if Martin didn’t end up with that million-dollar stash, after public attention faded from Gibson’s guilty-unless-proved-innocent shakedown.

There was no trial, no defense, simply the assertion by the jackboots that the wood lacked papers.

I wonder how many new employees Gibson could have hired on for that $1.6 million in fines and forfeitures?