The RNC rolled out its 100-page report on what went wrong in 2012 and what could be done better.

One word is missing.

Tells you everything you need to know. 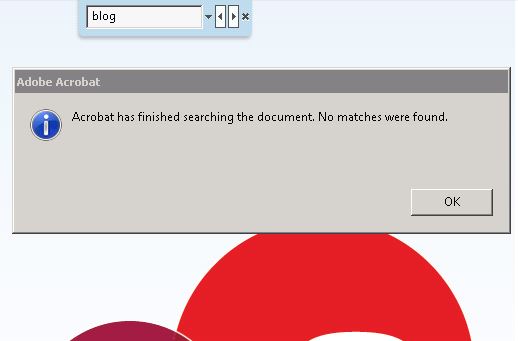 Even when the report does mention “social media,” it’s in the context of getting out the vote or having the party apparatus find a better way to reach voters.

I would not be surprised if the RNC spoke with some of the salaried conservative media class who share the Washington professional circuit.  But did they reach out to the Army of Davids who are the anti-thesis of the consultant model because we mostly don’t get paid or make much money blogging, we do this in our “spare” time, and we are outside D.C.?

Did the RNC get any input from the great unwashed conservative blogosphere?  You wouldn’t know it from the report if it did:

We met with, or spoke to more than 2,600 people, both outside Washington and inside the Beltway. We spoke to voters, technical experts, private sector officials, Party members, and elected office holders. We sought out Republicans from all ideological backgrounds. We convened in-depth focus groups with voters in Iowa and Ohio who used to call themselves Republicans, but who left the Party because they thought we weren’t conservative enough or because we were too conservative. We conducted a poll among 2,000 Republican Hispanic voters. We surveyed political practitioners at the state and national level and also conducted a survey of GOP pollsters. We consulted with independent pollsters. And more than 36,000 individuals participated in our online survey to determine priorities and to identify additional volunteers for the Party.

For the RNC to produce a 100-page report and not have a single mention of the need to interact with and support the conservative blogosphere tells me that the RNC simply has rearranged the deck chairs on the HMS Consultant.

We may not be all that, but it’s clear that the RNC doesn’t want us to be any part of that.

This guy gets it:

Update 3-21-2013 — Someone send me a message that the RNC has spoken with some bloggers and that some of their suggestions made their way into the report. If that’s the case, the RNC clearly was not highlighting such input, and still did not mention the conservative blogosphere at all in the report.

1. For the RNC to produce a 100-page report and not have a single mention of the need to interact with and support the conservative blogosphere tells me that the RNC simply has rearranged the deck chairs on the HMS Consultant.

Indeed. It would be interesting to know who they hired to do all those interviews, focus groups, and data analysis—and how much they paid.

2. I searched the document for ‘liberty’ and ‘libertarian’. Nada.

3. Great to hear Cruz sounding so dynamic and down to earth. That’s a side of him I hadn’t seen before.

Maybe they think that if the Founding Fathers didn’t include it in the Constitution or Bill of Rights, it doesn’t belong.
Without the blogosphere, the humiliation that the Republicans suffered last year would have been worse.

Elite consultants, homosexual agenda, Amnesty for illegal aliens. I’m seriously considering re-registering as an independent. This is not my party anymore.

So, I wasn’t the only one asking “what the heck”?

Ditto that….who are these people and can they be any lamer?

What once happened, observed Ronaldus Magnus about the Dems, has now happened with the GOP–we didn’t leave the Party, the Party left us.

I’ve had enough of this fun for a lifetime. “Waiter, the check please!”

Next time offer your blogging services for $1 million. Apparently they only pay attention if you make them pay money first.

Today in the mail, I received a lot of political junk mail, all with huge surveys that desperately want my opinion and a donation.
If it comes from an RNC or Republican Party affiliate like the Congressional or Senatorial Committees, I’m sending the donation envelope back to them empty as a protest.

It’ll cost them to send me more of their junk mail and even more for the postage they’ll have to pay for the empty reply.

If enough of us do this, maybe they’ll begin to see a pattern–that we’re fed up of the “Wacko Birds” they’ve saddled us with for leadership or as presidential candidates. Let Graham and McCain reimburse them for the postage!

I intend to do the same if Karl Rove’s group sends a solicitation.

No one ever accused the GOP of competence.

So, now, the GOP is caving on every issue, verifying each and every allegation the democrats have ever made, forgetting all about the technical stupidity the GOP has reveled in for so long.

If you can’t get your base out… non of this matters. And the clowns running the show simply don’t get it.

I have, in fact, as a former state executive director (WA 2000) renounced my GOP affiliation and have now become an independent.

In the beginning there was pamphleteering. Now we have blogging. We are the spirit of the pamphleteers moving at warp speed.

“But did they reach out to the Army of Davids who are the anti-thesis of the consultant model because we mostly don’t get paid or make much money blogging, we do this in our “spare” time, and we are outside D.C.” in our pajamas.?

“One word is missing”.

IMHO, I believe there are three words missing..(Oh and the exclamation point)

During the primary Santorum also sang praises of bloggers. The smart ones know just how invaluable you are. It was a woman blogger from the state of Washington who first mentioned “Tea party”.

Yes, Ted Cruz does get it and that is even more evident after Rand Paul’s push for amnesty for illegals. Cruz is a stringent supporter of secure borders, E-Verify and other enforcement of current immigration laws.

As Ronald Reagan once said, “I did not leave the Democrat party, they left me!”

They are afraid bloggers will say “We Want Palin!”

Blogging is just a passing fancy. It won’t last more than another week or two.

Seriously, I believe Reince Priebus and the RNC started with the conclusion and worked back from there. They wanted to shift the blame for the role their incompetence played in losing a vey winnable 2012 presidential election and who better to scapegoat than intolerant conservatives.

Why should they pay attention to bloggers? Why change what they’ve been doing (or wanting to do, such as Comprehensive Immigration Reform)? They already know how politics is done and they’re very good at it. Just ask them.

I’ve worked with plenty of people who, after a couple decades in the same field, seem to develop backwards facing blinders. If they haven’t already done it for 10 or 20 years, it’s not even an option.

They don’t resist change. They ignore it.

We are all Andrew Breitbart now.

“When governments fear the people, there is liberty. When the people fear the government, there is tyranny. The strongest reason for the people to retain the right to keep and bear arms is, as a last resort, to protect themselves against tyranny in government.” – Thomas Jefferson

Reince Priebus is making Michael Steele look like a genius. Boys and girls, that isn’t easy.

We gotta’ make it Reince Previous..

Yet another glaring reason why I have left the Republican party, or I should say, they LEFT me. Vote Libertarian.

Conservative bloggers are considered part of the GOP base, to be take for granted.

Take the vowels out of Reince Priebus and you get “RNC PR BS”.

Brilliant! and so vewy twue

[…] Maybe Legal Insurrection is subconsciously in the Kline camp after blasting the RNC 2012 postmortem. There’s something missing […]

Meet the new GOP. Same as the old GOP.

Let’s move on from them.

The corrupt morons hogging the leadership of the GOP: they are a gift to the left that keeps on giving.

[…] Read the whole thing. The idea of “citizen-journalism” is quite nearly alien to the consultant class. The teamwork concept of voluntary collaboration mystifies people for whom politics is a paid gig. Take away their consulting fees, and these guys wouldn’t have anything to do with politics. […]

These Yahoo’s consulted and surveyed some 40,000 warm bodies, experts, and minorities and not a single blogger.. Good luck with Re-Branding best to add generous self application of electric cattle prod… I hear shock therapy is very effective “Don’t Taze Me Bro”

[…] Senate for the assault-weapons ban, says Reid Democrats up for reelection will not burn for Obama RNC Report — 100 pages and not a single word about bloggers They don’t recognize us, so don’t expect us to disseminate their lame messages […]

[…] “RNC Report — 100 pages and not a single word about bloggers,” William A. Jacobson  writes at Legal Insurrection: […]

[…] Senate, in part because the GOP powers-that-be failed to take advantage of the excellent work Legal Insurrection did uncovering her lies and evasions about her claim of Cherokee […]

Since the national party has decided to ignore the base and its most passionate spokesmen, it is incumbent upon us to invade the GOP hierarchy, form Republican organizations that perform outreach, publicity, organizing, fundraising, and GOTV efforts to get our candidates elected.

Time to take charge not only over our polity, but over the people who rig the game so that we can never win.

It’s all about the dollars. Maybe it’s time to get off the ship. http://www.americavictorious.com/2013/03/22/i-intend-to-write-a-strongly-worded-letter-to-the-rnc-about-all-of-this/