Rand Paul’s filibuster of John Brennan yesterday, which went on for over 12 hours, was a phenomenon.  He was joined at various times by Mike Lee, Ted Cruz, Marco Rubio, Ron Wyden, and late in the night, Tim Scott, Ron Johnson and others.

As the screenshots in my post yesterday show, it was the banner — in a good way — at both Drudge and HuffPo.

#StandWithRand was the highest trending term on Twitter worldwide.

Progressive bloggers like Glenn Greenwald heard their writings read on the floor of the Senate by one of the Senators most demonized by the liberal media and Democrats, and supportive groups like Media Matters and SPLC.

Progressives bemoaned the fact that other than Ron Wyden, their heroes like Elizabeth Warren were nowhere to be found on the most basic of civil liberties principles, the right of an American citizen in America not to be deprived of life without due process of law.

Paul’s filibuster on the specific and narrow issue of using a drone to kill an American on American soil who was not engaged in an imminent and substantial threat of violence was the perfect issue on which to mount this historic filibuster.  It is an issue which, as narrow as it were, was so basic that even the normally Obama-worshipping media could not crazy Paul over it.

This is another example of what I said in the aftermath of the suicide of Aaron Swartz.  Groups which do not normally agree on so many political and economic issues can find common ground on limited government.

Here are some tweets I saved yesterday:

I’m proud of my son’s efforts today to shed light on this administration’s destructive and dangerous drone policy. twitter.com/RonPaul/status…

“This is not a partisan battle. Bush started this.Obama is expanding it. Irony is Obama ran as the anti-Bush.” –@senrandpaul

There is plenty to disagree with Rand Paul about. But this filibuster is not. Thank you, sir. tickcounter.com/countup/2013ma…

I’m ashamed of US progressive movement and Democratic Senators for letting the far-right be the leaders on #drones. #StandWithRand 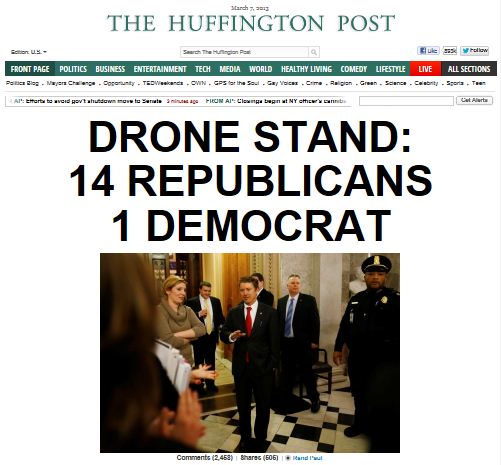 All the hack pols should take note: this is what a REAL politician, a real representative of the people and adherent to the Constitution, looks like.

It is especially revealing that the Democrat “usual suspects” allowed this errant policy to proceed without any resistance despite its unconstitutionality, which means that they are party first, themselves second, America a distant third. Thankfully, Rand was supported by other Republicans. Patriotic Republicans.

I think a lot of people will be confused by this. Actual morals?? I thought those were a fairy tale for the nerds in elementary school.

Something in DC to be happy about

Yes, there are a few lefties voicing their support for Paul. True to form, they will jump at the first excuse they can manufacture to nuance their way back to Obama’s camp.

I watched as much commentary as I could, both right and left, and am left with one thought:

I can’t believe we’re even having this discussion!!

What’s really amazing is everyone of these politicians took the solemn oath to defend the constitution and there sure were a lot of them who were MIA. It appears that oath, which I have taken no less than six times in my life, doesn’t really mean too much to them unless it can be used to further their status when they need it to.

A perfect wedge issue that is dividing the other side. It exposed to the progressives that their “heros” are pro-establishment, status quo party hacks and not principled leaders. Alinsky would be impressed with Rand Paul’s strategy.

Now, is there a way to make as spectacular a stand on defunding ObamaCare?

I agree with your statement.

1. The issue of drone strikes on American citizens on American soil is ridiculously narrow and trendy. Who cares about what instrument is used if you are the target?

2. I doubt this was lost on Paul, ergo, he was kicking open a much broader barn door…Obama’s fealty to the Constitution and rule of law.

3. There will be pressure from SOME in the Collective to examine Obama more closely now that Paul has ripped the bandage off the putrefying wound that is the Obamabanana Republic.

4. Harry Reid, et. others, were exposed and pwnd.

All told, it was a good day…

today we saw the formation of a new force in the Senate, generally composed of TEA Party Senators…all of them young, smart, and good at what they do.

It has a decidedly libertarian influence, but is solidly conservative.

The Paul filibuster was not the only…or even biggest story. Ted Cruz MADE Eric Holder answer a direct question directly, and that was no mean feat.

We will be seeing that new force more in the near term, I’m betting.

If only we lived in a world where teachers would have required watching the filibuster. And then led an honest discussion about it. It was living politics at its best.

Is it just my computer or is anyone else seeing the comments and even the text to this post and the earlier ones, all in BOLD? Me thinks someone left a dangling html tag open.

Not to worry, history will be spun for the narrative to make Democrats look good. Just remember the farce they pulled with the Civil Rights Act of 1964. Years earlier under Eisenhower Democrats killed a similar bill. Democrats refused to support it but for the GOP pulling a fast one finally getting it passed. Who got the credit for passing it? Why Democrats.

There is one undisputed skill a Democrat has, the use of PR to come up smelling like a rose when they weasel out of being on the wrong side of an issue.

and my God the issues they have weaseled out of and the excuses they have used to do so and that so many of the American people have bought these excuses …. on race …the civil war…. Jim Crow …. The Black Codes …. the KKK …. The Poll tax …. lynchings ….how do they turn it …. oh that easy they would have you believe that on Jan 1 1974 all the racist democrats flipped and became racist republicans ….LOL …. they call Republicans war mongers well the civil war was began by democrats in order to keep the right to own black men women and children
WW I …. a democrat president
WW II …. a democrat president
Korea …. a democrat president
Vietnam …. first troops and aid sent in under truman … all in under kennedy and johnston
1,200,000 dead American service men and women under or because of democrats …. under Republicans …. less than 20,000 …. remember Bush lied … people dies …. explain to me the Gulf of Tonkin incident …. civil rights ….explain to me special order 9066 which gave FDR the authority to lock up American citizens based on race

I hope we are, in Rand, Cruz, et al, witnessing the onset of a conservative renaissance.

Why can’t the president just admit what is obvious, that he’s not permitted to murder American citizens?

We have a template that covers every scenario, real or imagined.

It’s called The Constitution of the United States.

As he stated in the above video:

Ahhh yes, the “bolds” bring back fond memories in the days of http://timblair.net/ now defunct, prior to his getting a REAL paying job, when he joined the http://blogs.news.com.au/dailytelegraph/timblair/

The topic(s) THEN turned to: ‘Who in the hell left the BOLDS on!’

OH SURE! Now the BOLDS is OFF. LMAO!

It may end up being historic for what it means for the Republican Party. Drudge was the first person I saw on twitter to note that we were witnessing a changing of the old Republican guard.

The ROOKIES led. The first people on the floor supporting Paul were: Cruz, Lee, Rubio, Moran, and Saxby Chambliss. Rubio quoted Jay-Z and some other rapper I’ve never heard of before. All except Saxby were elected in the last two years as Tea Partiers. All (again, except Saxby) had to beat establishment backed candidates in primaries to stand with Rand.

As the day wore on a few others joined in, but it was the young Tea Partiers who led.

It was disappointing that Tea Partiers Kelly Ayotte and Deb Fischer were absent.

The Old Republican Guard was sequestered behind closed doors with the Obama trading away our freedoms, while the new guard is on the floor being transparent.

Do not fail to credit Ron Wyden, D-OR. That took guts.

You’re right. I intended to phrase it in terms of the first Republicans who came to floor to stand with Rand, but I screwed up the wording.

Ron Wyden was in that first group and deserves to be acknowledged. Thanks.

Fischer is a fraud. She is not a conservative.

I watched all but the 1st 2 hours of the speech(when I learned it was happoening in the first place), and I must say that it was a real pleasure. I figured if he could talk for that long, I could listen for that long.

I said before. The transcript of that filibuster along with the questions should be published along the lines of the federalist papers.

Indeed, the rookies led the senate. I was actually disgusted when Mitch McConnell took to the floor in the 12th hour of the filibuster. Leading from behind, what an arse. But I suppose it’s “Better late, than never.” At least he was forced to support the junior senator from Kentucky.

I just wish he had strapped an empty 64 once soda bottle to his leg with some surgical tubing, then we might still be hearing this speech 🙂

What do you think the filibusters did in old days before television coverage? Pee in a bucket?

Should this administration kill any American on American soil without due process I would hope and expect impeachment proceedings begun immediately afterwards. However, I’m not sure some Republicans in congress would do this.

I’ve noticed that no one seems to want to bring up Janet Reno and Waco/Ruby Ridge…. probably for fear of being labeled a right wing conspiracy wacko, which is understandable. But we do need to consider that SOMEONE gave an order authorizing execution. I know for a fact that the Feds had their snipers onsite in Waco.

McCain and Graham are giving the media all the talking points they need to discredit Rand Paul. I just saw them on C-SPAN trying to undo all the good from last night. It is a pitiful display of groveling and misplaced loyalty. These two need to be marginalized and not heard from again.

McCain and Graham, poster children for term limits. They certainly are tools, and not of the good kind. Graham’s push on Benghazi has just been “neutered” by his stand today.

McCain and Graham are snatching defeat out of the jaws of victory…. what numbnuts

[…] Rand Paul found that sliver of principle on which right and left agree. […]

[…] cheered on Rand Paul’s filibuster, but more importantly, it also was supported by a few liberals too. So finally, someone found an issue that unites both America’s right and left. Let’s […]