The Atlantic published a piece by Connor Simpson ridiculing conservatives’ reaction to the Obama Virgin Voting ad by pointing out that it is conservative old white men who are “outraged.”

Simpson posted screen shots from four white men, linked a few other white men, and proceeded to write an entire article about the collective outrage of old white men:

President Obama teamed up with the most divisive 26-year-old in the world to make a suggestive ad encouraging young people to vote, but it seems to have upset some old conservative men on Twitter….The outrage is ridiculous. The ad is aimed at people who are between 18 and 22 years old, people who are young enough to have not voted in the last election but who are eligible now. People who probably know who Lena Dunham is, because she’s basically the voice of every Millennial ever, didn’t you know? But these men, these old, grey-haired men, are upset because sex and voting are not the same thing, and, and think of the children!

Where to start? Perhaps I’ll put my market research hat on and suggest that this isn’t exactly a representative sample; that it’s in fact the opposite–but that’s beyond obvious.

Also, Simpson cites Erick Erickson, Ben Shapiro, and Kevin Eder. Shapiro is in his twenties, Erickson somewhere near his thirties. Keven Eder appears to be in his twenties as well. Ok so, shocker, Simpson not only picked tweets to support his position, but he called people in their twenties and thirties old.

Then, on his own blog, Simpson posted a screenshot of tweets about the ad.  Interestingly, of the seven tweets he posts on his blog, at least four appear to be from women. Hmm. Just below the screenshot, Simpson wrote,”My first conservative Twitter bombing.” It’s not really worth dissecting Simpon’s piece beyond this.

What is worth questioning is why The Atlantic would publish it. (Or do we know the answer?)

Well, I too can cut-and-paste tweets. Even though I’m a woman, and Connor Simpson, it appears, would like to think I don’t exist. For the record, many women, many women of color, and many young women of color, even liberal women, found the Obama ad to be odd, off-putting, sexist, and weird: 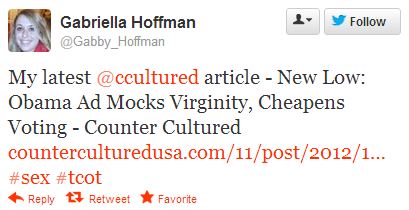 And my own reaction:

My wife heard this ad on the radio for the first time this morning as I was driving her to the airport.

Her response was: Ewww! Really? Sad!

the most divisive 26-year-old in the world

Um, don’t people actually need to know who someone is before they could be considered – in any way – divisive?

I still have no idea who this person is in the video. Nor do I much care.

Ditto. I had never heard of her or seen her until this ad. After this ad, I still won’t care who she is, what she does or what she can accomplish, unless it has something to do with curing cancer, taking the carbs out of beer or getting rid of the damned designated hitter.

Trooper, if you come out to Denver, I’m buying you a beer. Get rid of the DH, and baseball will finally be pure!

On a side note, google this Dunham chick, and read the huffpo article. The author states that even though she came from privilege AND used mommy and daddy’s money to get where she is, we shouldn’t resent her. She should be hailed for her intellectual prowess above all else.

Now what were they saying about Romney…

That ad was disgusting! Is that how The One wants the votes of just-out-of-high-school-or-college girls?!?!?

If I had a college-age daughter who’d tell me, “Mom, I’m voting Obama,” she’d have to foot her whole four-year tuition bill. I’m not going to pay cold, hard cash for Leftist nonsense.

If she doesn’t want to earn it the hard way, let her “boyfriend” do it for her!

Lena makes me want to scrape my shoes like I just picked up something in the yard.

I’m not “outraged”. Just disgusted. And grateful none of my kids are skanks.

Everyone should be offended by this ad – white or black, old or young, male or female. I echo theduchessofkitty: it’s disgusting.

But I have to say, I got quite the laugh when reading the article. I did NOT see that it was a guest post by Anne so when I got to the sentence “Even though I’m a woman”, I stopped dead in my tracks. The Professor, all this time, is a woman, posing as a man? THEN I glanced up to the byline. It was a good way to offset the major ewwwww factor of the ad.

I now lay awake worried that the next ads will have Obama bare chested on horseback , Obama with tigers , Obama with whales , Obama with snow geese & most frightenly , Obama swimming butterfly in a Siberian

Am blinded by technology here on my new device.

As a woman offensive is the nicest thing I can say about my reaction to this ad.

Obama is how old, 51 or 52? Something like that? How many first time voters/virgins want their first time to be with a 51 year old man who is old enough to be her father? That’s the message of the ad. Why wouldn’t most normal people find that repulsive?

Also, the actress has an androgynous look with an appearance that makes her look more like a teenage boy than a woman. Because of her appearance, I would not be surprised if the ad appeals more to 50 year old homosexual pedophiles attracted to young boys than it appeals to young, single women.

The girl could look all right if she would wash all of that spilled ink off her sholder and arm. This one and Fluck’ says alot about the morals of the democrat female.

“So…
we are down to Birds, Binders, Bayonets…
and Bands.
Well, and Biden…”

The lefties are lashing out at the cartoon conservative in their heads again. As an ad guy, I found it amateurish and embarrassing, and I’m closer to to the devil himself than I am to a social conservative. Pure vapid, amateurish Hollywood.

My 19 year old son son just said he is going in to the voting booth a boy,and coming out a man. He’s votong for Romney.

So, I must ask, would the party of ‘equality’ and ‘women’s rights’ run an obverse version of this spot when Hillary runs in 2016? (That spot would obviously be featuring a man the same age as the woman in the Obama spot.)

The Atlantic (and I couldn’t find the comment by Connor Simpson; not listed on the masthead) is totally ALL Obama, and they say Romney will lose big time. Sigh.

(The Obama ad could featured an 18-year-old gay man too.)

When the Obama campaign came out with its riff about how women should “Vote Like Your Lady Parts Depend On It,” I said to myself: That’s it; that’s the bottom; they can’t go any lower than that.

I have no idea who to credit this too, saw it today and had to post this pic

To The Atlantic and Connor Simpson:

When I was Lena Dunham’s age the feminists motto was Biology is not Destiny. Today the motto appears to be I am my Vagina and nothing else. How sad.

Old white men don’t use twitter. I can attest to this as I am an old white man and see no sense in the technology as I could give a flip what other people say or think. Then there is the fact that old white men like myself really don’t care for fat young girls with tattoos. We consider them to be trash and anything they do is trash.

I’m a heterosexual, old, white guy, and if she looked like Rachael Welch, Joey Heatherton or Ann Margaret, I might get hot and bothered.

However, beautiful, unpierced, un-tatted, women aside, that term now more aptly describes me when I’m running the weed-eater on a muggy July afternoon in Houston and some piece-of-sh!t drives by in his rice rocket with one of those stupid amplifier mufflers and those blasting bass speakers playing some gangsta rap sh!t song. That is “hot and bothered” 2012.

I guess that makes me an old, white man… which will come as quite a surprise to my husband.

Don’t show him your post. Then, he won’t know!

I just don’t get why they used a doughy longshoreman in the ad. Doesn’t seem to fit the tone of the ad. The voice is odd, too.

I found that ad to be highly informative.

I know more about Obama’s ‘positions’ now than ever before.

In fact, I’d say that’s the first and only informative ad his campaign has produced.

And for the record, I’m an OWG.

Or OWM, or OWF, or whatever your preference.

As soon as I saw the tat and the incoherent speech, it all fell into place. Or should I say it fell to pieces just like the campaign of the anointed one.

AND… As an old white geezer, ah knows wot ah’s talkin’ about!

Another day, another atrocity…

Too, too funny – yeaaaa, Steven Crowder!

I have not even seen the parody yet, but I already burst out laughing when I clicked the link and saw the still frame of the video pop up in a new browser window.

Excellent job given how quickly he threw it together, so I will cut him some slack on the “four years of college” error. Six or seven is more like it, and these ninnies haven’t even been partying like Bluto.

I am the one who gave you a thumbs-down.

I did it because you are RACIST!!!!

You managed to do two racist things at once:

1) You strongly implied that Barack Obama is a Dirty Black Motherfucker (even though Biden said he was “clean” and “articulate.” I guess some Vice Presidents ARE out of the loop).

2) You are cynically preying on the old cliche of white women having their virtue ruined by black sexual predators!

This just in…. Guam Capsizes Because Of Angry Old White Men…. News at 11.

1) The sharpest responses to this “first time ad” is coming from women, not men, and a lot of the ones I have read online sound like they are coming from liberal women and feminist women, not prudes like the School Marm on Little House on the Prairie (or was it the wife of the owner of the dry goods store?)

2) I don’t know who the hell Leana (Lena? Aw, who cares) Dunham is, but this is so sad. Usually, entertainers, commmentators, etc., don’t engage in such low-brow and meritless political advocacy or sniping until their careers hit the skids like Barbra Steisand’s, Janeane Garofalo’s, Bobcat Goldthwait’s, or Keith Olbermann’s.

I am so glad their careers are not alive to see what these persons have become.

Think I am forgetting some exmaples. Help me out here.

P.S. – What is the Over/Under on Keith Olbermann getting into a physical altercation between now and December 31st?

Obama is well past the point of contesting for the votes of the intelligent and/or well-informed. His fate is in the hands of the young and stupid, the parasites, and his fanatical leftist core supporters.

[…] learn that whereas Obama virgin ad are cool and all, and, according to The Atlantic at least, only “old white men” can find a fault with it, Putin virgin ads were “creepy”.  Go […]