I know exile, exile is a friend of mine, and you, Sir, are not in exile

I know exile, exile is a friend of mine, and you, Sir, are not in exile

If you think being conservative in Lee County, Florida, is being in “exile,” there’s this bridge in Ithaca I’d like to sell you.

In Westchester County, NY. I saw the sticker out of the corner of my eye and expected to see a license plate from a really blue state, so I was surprised when I came around the block to find a Florida plate. 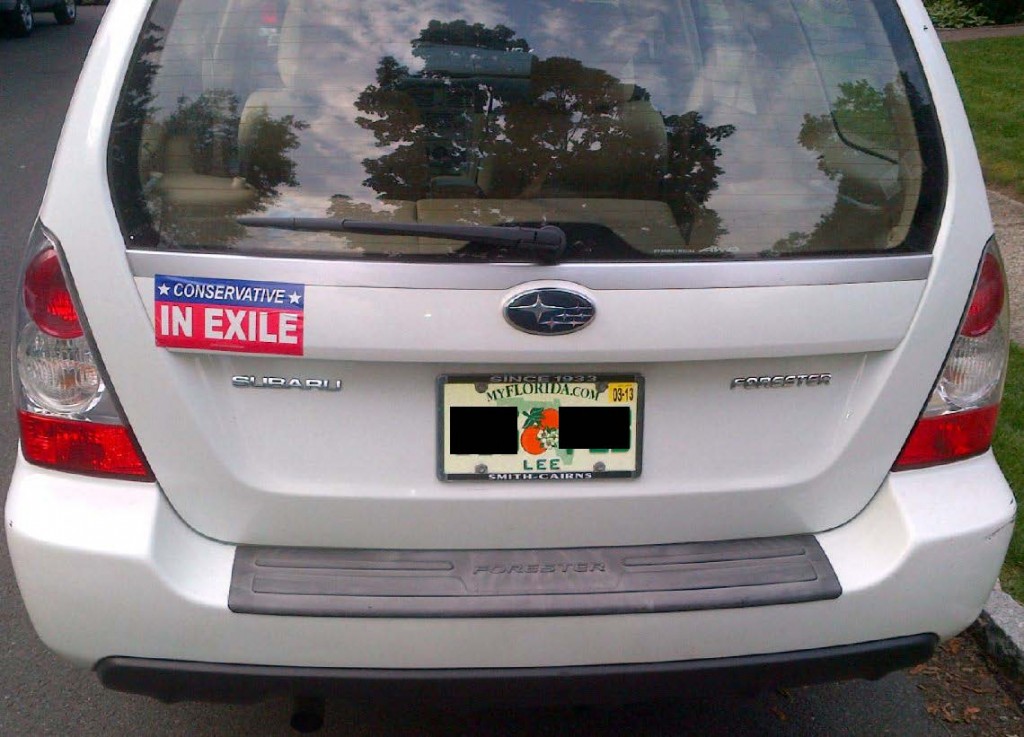 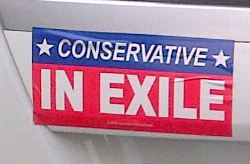 As a Florida conservative, may I suggest another meaning?

I lived in the NE for 20+ years of my adult life before moving to Florida. I really would rather live in the NE, although the weather is nice here 9 months of the year.

So, while it is politically “friendlier” here, it is living in exile, having been chased out by high taxes and unfriendly business regulations.

What you are reporting on is “living with the enemy”. Those who would prefer to live in the NE and are living in Florida are “living in exile”. Which can be a lot easier.

I know some Iranian exiles living in So Cal, and living in exile is a whole a lot better than what they had. 🙂

One thing that drives me nuts, though, are liberals who moves from the NE to FL and bring their voting habits with them.

Should be a law against ruining a perfectly good tax regime by liberals seeking to escape the places they have already ruined.

Having fun in Ithica, Professor? I had fun in Madison in the 80’s.

Someday it’ll turn your way. May I now spike the football? I’m SO proud of my home state of WI! Take that, all you pinko scum who messed up our beautiful Capitol building.

Maybe the driver meant that living in NY is like an exile to him/her…I was living in Florida before I moved to Maryland, so I know the feeling…

Florida. Who can forget Jerry’s Dad & the Condo meetings? That condo furniture -hehe.

But now that the BGs are in Florida I am waiting to see if Prof puts up his fave disco song. A wonderful time in music & Barry Gibb’s pants! OMG.

Gladly, I’ve never lived in exile, but on my travels I’ve certainly been in the belly of the Beast on occasion. I can only say that it felt like what Voltaire must’ve felt living in Paris.

Wait, am I gettin’ too touchy feely?

I would consider even a more broad view. . . as long as the socialist Voldemort and his ilk are in power, the ¨Conservative in Exile¨ might feel like America has kicked him to the curb. . . hence he is in exile while still being in the USA.

Awww, c’mon Professor…..Ithaca does have a few Conservatives. They are just all in hiding and seldom venture out in the daylight although, if you really want to find them, go no further than Wegman’s parking lot.

They can easily be identified by the many ‘accidental’ door dents, crushed bumpers, wrinkled fenders, keyed hoods, etc that plague their cars. If you haven’t the time to scan each car individually just look for the ones who mysteriously always seem to have every freaking shopping cart jammed up against them adding to said ‘accidents.’

Confession: I don’t live in Ithaca but did have many customers there for twenty years and have to admit that I always enjoyed my days spent there because, after all, doesn’t everyone love visiting the zoo?

Note to my former loyal car: Forgive me for all the suffering you had to endure at this infamous parking lot. I tried to protect you but somehow ‘they’ knew you were not one of them.

Hmm, anyone notice they are driving a Subaru, the favorite car of leftists everywhere (with the possible exception of the Volvo XC70).