This was, in many ways, the best answer of the night, with Newt turning the tables on his critics with a single word:

Mitt Romney Central was not amused:

The “press” has a sense of humor: 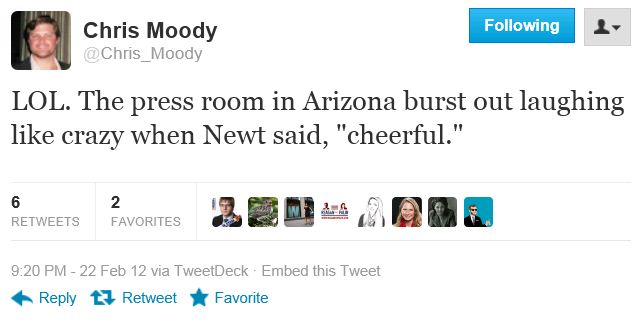 I’d say the best answer of the night was Newt’s answer on education. It was part tongue in cheek, but he laid out perfectly the liberal mentality that has destroyed the education system in this country.

I guess “giddy” was already taken.
Newt is always so relaxed and in control, and he makes me smile.
Oh, and he’d be a baddass President.

Loved Newt’s answer. He demolishes his opponents with a smile. He is truly the happy warrior. A huge win for Newt as Mitt & Rick sniped and Paul regurgitated his same old message of liberty with a touch of isolationism thrown in.

I must say that for the first time, I felt that this debate brought Republicans TOGETHER.
The candidates supported each other, and that was comforting.

Only one is going to win, and that winner MUST defeat Obama.
Or our country will be destroyed.

Romneycare, whatever you are, he’ll be, until he meets someone new!

Yea, that was a laugh. I think I even heard the wood on the Resolute Desk at the White House snickering over that one:)

Buddy Roehmer has just announced he will make an independent run for the presidency. America’s response: “Buddy who?”

Cheerful. Perfect answer to a truly inane question.
(My one-word for Romney would be “liar”.)

It’s a form of gotcha question, providing an opportunity for the moderator to hopefully get a stupid answer from one of these GOP clowns.

Yeah, what was the point of the “exercise”? To make them look silly? To act as their counselor, and set them as his “patients”?

“Cheerful” was a great indirect diss and shut down follow-up questions.

[…] Newt Gingrich did well tonight and should certainly be “cheerful”. Romney must be smiling too. […]

It would have been funnier if Newt had said “Presidential”.

“Drill now and stop bowing to foreign regimes” is a good place to start. I would add that we need to end the irrational fear of nuclear processes, and develop energy sources as they are most suitable to application.

I laughed (with him) when he said it.

Newt hit it out of the park!
I hope Sarah will endorse him and get out there campaigning for him.

That would be great! However, I do not think she will right now considering there MAY be a brokered convention and she may get into the race.

I wish. But Palin already said there is no way the Establishment GOP would go for that.

A little off topic. I have been thinking about Ron Paul. Rick Santorum should have said, “I might be a ‘fake’ in Ron Paul’s eyes (but no one who has worked with me), but at least I am not a ‘flake’.”

Ron Paul’s lack of criticism of Romney is beyond believable. Rand Paul made a statement that he would be honored to be Romney’s veep. Maybe this is the October surprise promised to Ron Paul.

That would indeed be a deal to make the Paul family happy, and explain Paul’s no-attacking-Romney debate responses.

Rand Paul is a good choice for veep, although I prefer Marco Rubio or Allen West.

IF Romney is the nominee, I think that he will have to have a sharp contrast from himself as VP and I think Rand Paul would be the key for Romney to get most of Ron Pauls supporters to vote for him. However, I am hoping Newt chooses Alan West, Newt said he was on his short list. Newt/West 2012!

How am I to square this?

I didn’t watch the debate. I read through the comments on a number of trusted blogs this morning to get a feel of the debate, and who “won”.

Then I watch Fox News/Fox & Friends this morning, and lead after lead, pundit after pundit, tell me Romney was the clear winner.

I think Romney won the debate he was having with Santorum. I don’t think it was a good night for Santorum. He had it coming from both sides, literally (Ron and Mitt) However, Newt stayed on topic, he was positive and motivating. He was clearly the Statesman in the debate! Didn’t let Mitt get to him. “Nice Try” Classic!!!!

I think the most unfortunate part of the debates is the fact their time is so limited in explaining their views and unless you really study the candidates, you really have no way of knowing.

Then maybe you should watch a video of it and make up your own mind.

The point is, since you missed it–is that the overwhelming majority of conservative readers–i.e. republican primary voters, clearly had Newt as the winner.

What I personally think is inconsequential to the point.

I didn’t miss it, but you might have missed mine – and I truly hope you don’t believe what you personally think is inconsequential to any point.

Maybe we’re talking past each other-

“A person” IS inconsequential to “most people”.

There seems to be two disconnects at play here-

One, being what most people thought who the debate winner was and who was the “reported” winner..

The other being our little debate..

As “A Person” I watched it and Newt won the debate IMO, and for me that’s the only opinion that counts. Have a nice day.

Hi Browndog. Do you not see the big discussion about how Roger Ailes told Fox to veer left? and how many people are upset with Fox and have stopped watching Fox?

No surprise that Fox will announce that Romney won the debate.

If you watch the debate, I think you would be hard pressed to say that Romney won. He and Santorum looked like someone had strapped big fluffy boxing gloves on their hands and they spent most of the night in the most boring two-man slapping festival I’ve ever seen. We just muted the sound.

CNN occasionally would include a wide shot, and you could see Newt over on the right, relaxed, leaning back in his chair, while the two self-centered mental diminutives said, “Oh yeah? Well YOU,” to each other. Who needs that? yuck.

It makes you feel sick and bored with Western Civilization. Romney & Santorum were a clown show.

Newt was presidential and the closest thing BY FAR that we’ve got to Ronald Reagan.

Newt was fabulous. See for yourself. Newt HIGHLIGHTS from the Arizona debate: http://conservatives4newt.blogspot.com/2012/02/newt-gingrichs-arizona-cnn-debate.htm

QUESTION: Anybody know how many times “I saved the Olympics with the help of federal dollars” Mitt said the word “Olympics” during the debate?

ANSWER: Way Too Many

[…] fiscally conservative record in the Senate–sorry Mitt, you lose by comparison. And yes, this was a pure delight.More. So who's in favor of economic […]

I got this, this morning.

This message from Newt is very worthwhile. It’s persuasive, but long. I hope it gets broken into 10-minute chunks and re-issued.

Romney didn’t close the deal with me last night. Especially near the end when he told John King he will answer whatever he wants to and any way he wants to. Way too arrogant and not what I want to see. He has pulled that several times in these debates.

The MSM will tout Romney’s win all day long because they want him to go up against Obama and LOSE! Obama will obliterate Romney, mark my words. It will be a piece of cake for him. Obama will have Willard twisting in the wind before the debate is over. Willard will be stuttering his fool face off. 2008 anyone?

Newt had a very solid performance which he needed. Why anyone can’t see Newt as a leader is beyond me. I think the “wannabe” Newt candidate Santorum should get out and give his delegates to Newt and make this an interesting race.

‘cheerful’ was a very funny answer to a very silly question, but i was waiting for one of them to say ‘president’.