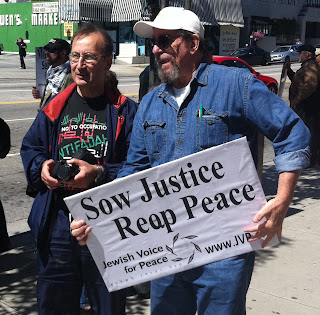 Sunday was Al-Nakba (“The Catastrophe”) Day, and it’s not just Arabs who are upset. Al-Nakba Day commemorates the defeat of the Arab armies in the 1948 Israeli War of Independence, when, rather than accept a two state solution, they decided to try their hand at genocide instead. The invading Arab armies vowed to push Israel into the sea, and expelled their own Jewish populations, destroying some communities so old that they predated the existence of Islam or even Christianity. While they killed thousands and created nearly a million Jewish refugees, they failed. Al-Nakba, and the day to commemorate it, is a narrative that inverts reality – one in which the Jews attacked and expelled the Arabs with genocidal zeal.

Sunday, a coalition of anti-Israel Jews and other assorted Palestinian activists, led by Jewish Voice for Peace, LA Jews for Peace, CODE PINK, and Friends of Sabeel (A Presbyterian-affiliated Palestinian Christian organization), protested outside the The Simon Wiesenthal Center’s Beit Hashoah – Museum of Tolerance in West Los Angeles. The Museum of Tolerance exists to raise awareness of prejudice and genocide, particularly the Holocaust, and of course, to promote tolerance. They are a popular destination for field trips, and provide race relations training to law enforcement and court-ordered classes to certain types of criminals.

The far left has been targeting the Wiesenthal Center with increasing tenacity in the past year or so. Palestinians and other activists, most of whom voiced no objection to the destruction of the Jewish cemeteries of Gaza, are up in arms over their building a museum on a Jerusalem municipal parking lot that was at one point an Arab cemetery (Of course, if it is not permitted to build where something of historical significance once stood, it would be pretty much impossible to build anything in Jerusalem at all). The far left was all the more enraged when the executive director of NYC Museum of Tolerance announced his opposition to the Ground Zero Mosque, calling it “insensitive.”

Because the Museum of Tolerance is located in a very Jewish area, neighbors and passers-by stopped to engage the protesters, while the pro-Israel grassroots organization StandWithUs led a counter-protest across the street. Like many counter-protesters, I stumbled upon the protest as I drove by, and then returned shortly after to join the counter-protesters and document the scene with my cell phone camera. A picture tells a thousand words, so embedded below is a captioned slide show that tells the story of the protest.

Dude, you should've called me. I'm not far away.

I used to contribute to SWC until they developed mission creep to expand into supporting open borders and amnesty. I'm sure that is not what Simon Weisenthal intended when he started his center. But if they can re-focus on their central purpose and leave the liberal crap to someone else, I would certainly return. I wish I had known this was taking place. I wasn't feeling well last weekend (or today) but I might have crawled over to lend my support and take pictures for posterity.

Seeing the dhimmi Jews there, I get the same feeling I got when I saw LGBT groups demonstrating alongside Hamas in Europe after the Gaza flotilla was rightly turned back. "Here you are demonstrating beside these people who would, given their druthers, happily KILL YOU DEAD, and you can't even see it". It's kind of a sad, hopeless feeling, tainted by a faint touch of "and it would serve you right. Idiot." I'm not proud of that last bit, and I certainly don't wish it on anyone, but my God…..such willful blindness to reality boggles my mind.

the protest started at the israeli consulate earlier in the day

Wasdave: you are right. These people will go down first, as they are closest to the enemy. That is their punishment, they can't see it coming!

Sorry, they ARE the enemy!! the enablers!

Wish I was also there filming what was going on.

Here's some of my coverage of similar events like this:

The Arab uprisings should serve as a reminder that the 'asabiyah which Ibn Khaldun championed as the bringer of justice is still alive and well in the minds of the Arabs. The Palestinians and their comrades around the world are the real freedom fighters. Israel is a state which only wants more power and domination over others (just like every state), and I find no reason (whether ethical or legal) to support Israel's interests.

Insurrection IS here. All the stuff which Bakunin and Malatesta wrote about is coming alive before our eyes. Yes, you guys may disagree with me and write me off as a "supporter of terrorism" but it's looking clearer and clearer that the Arabs are on the right side of history.

Ooooooh look out the keyboard anarchist revolutionary has spoken! Supporter of terrorism? Nah, just a run of the mill, dime a dozen, silly shallow person who pays lip service to lame rhetoric of insurrection while sitting comfortably at their computer. Yawn. Whatever you say Emma Goldman.

Actually what's perfectly clear is that you are a very silly, shallow little college student who is under the impression that you are "radical." Take note – adults laugh at you and your little costume party.