The owner of Wonkette, Ken Layne, and Jack Stuef, the writer of the most recent in a long line of Wonkette hit pieces on Trig Palin, are hiding behind the “Trig as Prop” defense.  They claim that they mock Trig only because Sarah Palin uses Trig as a “prop.”

Here is a tweet by Wonkette (presumably by or with Layne’s approval): 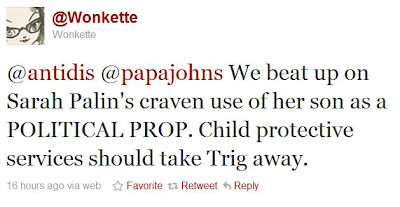 UPDATE: I regret this post and using the word “retarded” in a reference to Sarah Palin’s child. It’s not nice, and is not necessary, but I take responsibility for writing it. For those who came and are offended by this post: I’m sorry, of course. But I stand by my criticism of Sarah Palin using her child as a political prop.

This defense is nothing new.  Back in 2009 I documented how the “Trig as Prop” meme surfaced almost immediately after Palin was nominated.  I posted about this in It Always Has Been About Trig, including this quote from a self-described feminist:

In addition to keeping Trig up all hours of the night so that she can parade him around a stage after a pitiful debate performance or speech, she’s decided to use baby Trig to get some lusty applause out of the audience, because, let’s face it, there’s nothing evangelical Christians love more than a developmentally disabled baby they can use to their own end.

Trig alone has been singled out as a “Prop.”  It’s only when Sarah Palin treats Trig the way she would any of her other children that they are up in arms.

I stand by my prior assessment:

If Sarah Palin had aborted Trig, the left would have been okay with it. If she hid Trig offstage and out of sight, all would be good. But treat the child as you would any other child, and that cannot be tolerated.

There is something about a Down syndrome child in plain view which has exposed the moral and emotional bankruptcy of the left-wing of the Democratic party. And they hate Sarah Palin because deep down, they hate themselves for being who they are.

Ken Layne and Jack Stuef need to do some soul searching, and stop blaming Trig Palin and Sarah Palin for their own emotional shortcomings.

You are absolutely correct. And this whole scenario has thoroughly sickened me about the mentality of many of my former compadres on the Left.

Seeing Sarah nursing Trig in a sling, while signing legislature in the State of Alaska is one of the things that made me love her as much as I do.

Ken Layne and Jack Stuef need to be taught a lesson …

You're spot on! Nothing Layne or Stuef say will make them less than repugnant bottom feeders.

This is so stupid. I can't even remember the last time I saw Trig when Sarah was giving a speech or meeting people. They act like she's perpetually holding him up like he's the lion king or something.

They never complain about Obama using the mentally deficient Biden as a prop.

And this should serve as a reminder why we shouldn't allow so many personal and family decisions to be overseen, second-guessed, and ultimately over-ridden by state actors and bureaucrats.

Here we have liberal pundits, who are presumably as enlightened and understanding as any liberal state social worker, advocating terminating a mother's custodial rights merely because they hate her politics.

Think how it will be when they run the health care panels.

Well worth a read…

"Leftspeak is predicated on lying, on transforming rather than reporting. There are three forms of lying: omission, exaggeration, and misrepresentation. The left has mobilized all three commutations of the actual, leaving out what does not suit, inflating what does, and falsifying what may."

The Lingo of the Left by David Solway

Spot on. I suspect Sarah Palin treats Trig as she does because she loves him and wants to be as involved with him as her schedule permits. Y'know, just like a…what do you call those things…a mother, that's it. I do the same with my kids. It's a damn shame that so many Progs find this to be a foreign concept, when I was growing up, this was what was know as a "family". Weird, huh?

Well, I strongly question whether Palin has used her son as a "political prop", but let's assume that is a valid point for a moment.

Then why is criticism of Michelle Obama considered to be "off-limits", especially when she is so obnoxiously active in social and political matters? I seem to recall Chicago Jesus having a mini-meltdown during the Presidential campaign over just this matter. Heck, why aren't Malia and Sasha fair game? Hmmmm?

They are vile for calling Trig a prop. He is a child.

You know damn well had she NOT brought him on stage they would accuse her of hiding him, or being ashamed of him.

At Trig's age most mothers keep their children close. If Sarah were to do otherwise we would be hearing from the Left that Palin hides her child and no doubt the story would be that she hides him out of shame or some other silly notion. Sarah is behaving like a normal mother and the Left hates normal mothers.

will respectfully disagree on one point.

if palin kept trig off stage, they would have accused her of hiding him and being ashamed of him.

i do not think palin had a way to satisfy these people, short of going the full meghan mccain.

God bless her for not being ashamed of him and showing off her family as all politicians do!

The left care more about the weak in society than the right? Oh, puhleeeze. As Arthur Brooks has shown repeatedly in books and columns, conservatives are much more compassionate in deeds than liberals. Liberals talk the talk while conservatives walk the walk.

Professor, I also have to respectfully disagree with you about the left's likely reaction had Sarah hid Trig offstage at political appearances.

As American Girl in Italy, Carol, A. Worthing, and sort of runic ryhme have all said, the left would be howling with feigned indignation about Sarah Palin being ashamed of Trig.

And … worst of all … could you imagine the wild conspiracy theories boiling up in Andrew Sullivan's brain if Trig seemed to be hidden from the public?

It is my opinion Stuef's post is related to Palin's Madison speech, which was her first campaign speech of the 2012 election cycle, and her new presidential caliber website. The elite, deranged leftists are now going into overdrive, thinking that if they are even more brutal to Palin's children, she will stop.

It's good to see that I'm in such good company.

Wonkette is obviously a place that appeals to those who are dead inside and don't know it.

I put this together a few years ago. Will Gawker savage the Obama girls because their parents nakedly exploited them? I'm guessing that's a "no."

Actually, their concern is actually about Sarah Palin NOT ABORTING trig.

THIS is what bothers them the most; that a bright, attractive and successful woman CHOSE to bear trig even after knowing he would have down's syndrome.

That love and respect for the RIGHT TO LIFE is the bugbear of most of the haters. It's why they want to smear,vilify and defile everything about her child, her love and care for her child and her decision to bring that child up with love and respect.

The Democrat party has shown quite clearly that neither deficits or murdering abortionists will deter their party from it's support of THE MURDER OF UNBORN CHILDREN. No matter the endangerment of the physical and mental health of women or the nation's finances. No matter the degree of repulsive and heinous procedures that become necessary.

They are the PARTY OF DEATH and their takeover of healthcare should also be looked at as a continuation of their beliefs concerning euthanasia, eugenics and population control.

Glad to see Wonkette is stepping up to preemptively defend any right-wing sites who may insult Malia and Sasha.

On a somewhat peripheral note, I'm looking at a 4-day weekend starting tomorrow. I think one of those will see pizza delivery from Papa John's.

If I remember correctly, Mr Layne is the editor of "Wonkette". The site itself is owned by "Gawker". Nick Denton is the signer of the pay cheques.

There you go again Professor!

Cutting to the chase in your succinct and devastating style ……

Concerning the Left's rabid reaction to Gov Palin over her precious Trig, the exact same realisation has been swirling around in my mind too, and I was thinking about how to put it into words for a post of my own today …..

Instead, I believe I will cut and paste your analysis and link your blog. (just love the clinical way you write …. using no more words than just those needed to fully communicate, *__*)

I think the Leftists are tremendously fearful about the continued impact the Palin family (with Trig just there, being loved out front, like all the other children!) will have on the abortion debate in America. They have likely already seen the shift in the polls regarding the public being pro-life compared to pro-choice, with the numbers identifying as pro-life leading for the first time in a generation ….. and when did that shift happen? Why, right around Sep/Oct 2008 ……. hmmmm …. now I wonder what was going on in America at that time?

The wordpress.com blogger site I bookmarked on May 17 2009, that displayed the graph indicating the poll shift, is now 'no longer available'. I'm sure the tracking of poll numbers on this issue can be dug up somewhere though.

The Leftists are furious with Gov Palin because she has Trig with her whenever she feels like it …. just like her other children …. she loves him openly, just like she loves her other children openly …. they sense the impact such visuals are having ….. they are beside themselves with anger ….. desperate to stop Gov Palin's rise to even greater prominence.

I actually wonder how far they will go in their effort to prevent Gov Palin possibly openly challenging POTUS for his job. Many of them seem to be quite irrational concerning this issue of Trig.

Here's a Huffpo article just last month celebrating (with lots of photos) President and Mrs. Obama with their daughters at political/diplomatic venues in Brazil.

Keeping your children low profile and out of view is apparently only for the Palins.

Props, eh? Obama held a PRESS CONFERENCE at Malia's birthday party in 2008. His kids were on stage all the time.